This was the birthplace of the Tasmanian tin mining industry and introduced Tasmania to an industrial era.

In 1871, while prospectors searched for gold, silver and osmiridium along the Pieman and Donaldson Rivers, James ‘Philosopher’ Smith found tin at Mt. Bischoff.  This was the beginning of the mining era, a mining era that took the state out of financial crisis and saved Tasmania. 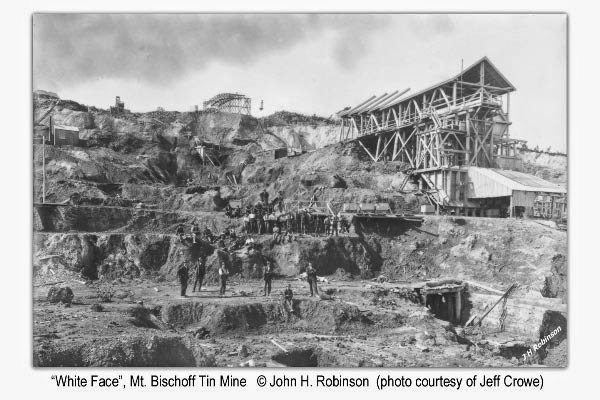 It was here at Mt Bischoff that John Eustace was born in the September of 1848.   John's parents and family remained living in this area for many years and it was about 1880 that John Eustace married Mary Duncan. Mary and John had seven known children, two of these children being sons - Harold and John - who worked as miners in the local mines.

Harold Alfred Eustace was born in Waratah on 21st November 1892 and his brother - John Montague Eustace - was born on 31st August 1896.

They were both admitted into the 15th Battalion, G Company and both embarked Melbourne on 22nd December 1914 on board the HMAT A40 CERAMIC bound for the Middle East.

On Harold's enlistment papers he is described as being 22 years of age, 5'7" tall (170cm) weighed 11 stone (70kg) had a fair complexion, brown hair and brown eyes and his religion was listed as Church of England. He also had a tattoo on his right forearm.

Their training was undertaken at the Broadmeadows Camp.

Prior to heading off to the Middle East, the 15th Battalion marched through the streets of Melbourne on 17th December 1914.


On 22nd December, 1914 the battalion was marched to Broadmeadows Station and left by two special trains to Port Melbourne where they boarded the HMAT CERAMIC a White Star liner. They steamed out of Melbourne at 2pm bound for Albany, Western Australia where the ship would join the fleet of transports heading for Europe. Owing to the lack of deck space, the training of the troops at sea was difficult. However, four times a day parades were held with instruction in musketry, physical training and rifle exercises. Many of the men suffered from sea sickness in the Great Australian Bight however most were was well enough to attend Church Parade on Christmas Day, 1914 and enjoy a Christmas meal of cold pork, potatoes, haricot beans and tough plum pudding. 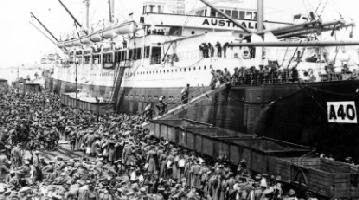 Finally on 20th January, 1915 the Ceramic entered Aden Harbour in what is today, Yemen. The harbour had many ships anchored including the Empress of Russia a liner that had been requisitioned by the British Admiralty and armed for active service. As well there were many native craft and before long they had thrown their lines on board and the natives were trading with the troops much to their amusement and delight. The weather was calm and very hot.

On the 30th January the convoy moved single file into the Suez Canal. Priority was given to the troop convoy and emigrant ships such as Orsova and others had to wait for them to pass.

The troops were anxious to disembark; they had heard of heavy fighting on the Suez Canal, however, bad weather prevented their disembarkation until 3rd February at Alexandria. There was a close call with the Ceramic breaking three lines, and she was she was nearly blown onto the Eastville. The next day they landed and loaded their kit bags onto trucks with some kit bags having disappeared from the hold during the trip. Police had difficulty keeping the Egyptians from the gangway and before disembarking the men had been warned not to drink the water, alcohol or not to seek the comfort of local woman as venereal disease was very prevalent. The battalion travelled to Cairo by train arriving the next day.

From 3rd February until 5th April 1915, the 15th battalion camped at Aerodrome Camp, Heliopolis and was trained in battalion, brigade and divisional fighting. Despite the warnings given to the men, many succumbed to the temptations of Cairo and charges of drunkenness and absent without leave were plentiful as well as admissions to hospital for venereal disease.

The 15th Battalion left Alexandria on the transport ships Australind and Seang Bee bound for Lemnos Island. The Seang Bee arrived at Lemnos on the 14th April. The troops were trained in disembarkation of the ship into cutters and horseboats until the 24th April. On the 25th April the Australind  with headquarters staff, B & D Companies reached the entrance to the Dardanelles and witnessed the landing and bombardment of the landing British troops.

The Seang Bee anchored at about 4.00 pm opposite the disembarkation point and, at 4.30 pm a destroyer took off 2 companies, however, they were not landed until 10.30 pm. While waiting the destroyer came under fire from shrapnel and four men were hit.


From May to August the 15th Battalion was heavily involved in establishing and defending the front line of the Anzac Beachhead.


On 6th August, the Allies launched an offensive in an effort to try to break the deadlock, during which the 15th Battalion attacked the Abdel Rahman Bair heights, which was known to the Australians as "Hill 971". 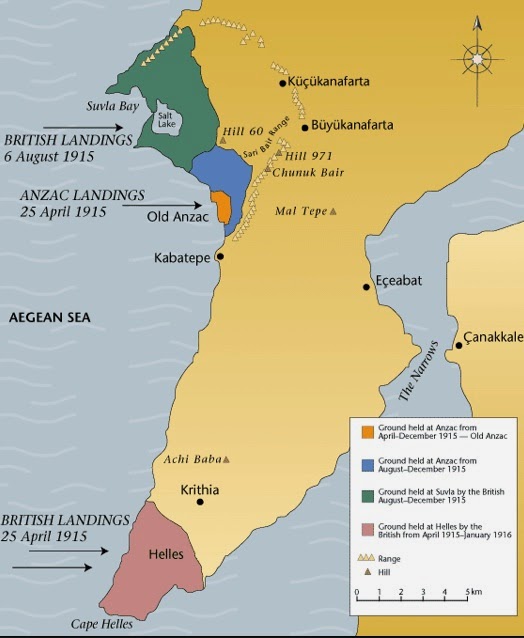 In reading the account of The August Offensive in the Sari Bair Range, 6–10 August 1915  it certainly brings to the fore the sheer numbers of loss of life and the overwhelming numbers of the severely wounded.

In one of these valleys Private Ormond Burton, New Zealand Medical Corps, witnessed the plight of some 300 wounded:


No-one appeared to be responsible for them. Their wounds were uncared for and in the heat some were in a shocking state. They had no food and no water .... Many were hit a second and third time as they lay helplessly … Many died there, some able to see the hospital ships with their green bands and red crosses no distance out to sea. On one trip I gave my water bottle to a Turkish officer with four or five of his men about him. He gave every drop to his men and took not a mouthful himself. I saw nothing more dreadful during the whole war than the suffering of those forgotten men.


In the early hours of 8th August, three battalions of the 4th Brigade–the 14th, 15th and 16th–set out. Dawn found them nowhere near the approach to Kocacimentepe. As the Australian battalions advanced over an exposed slope, Turkish machine guns opened up. Against this concentrated Turkish fire little progress was made. In the words of the Australian official history, the 15th Battalion, with most of its officers dead or wounded, ‘broke southwards’ for cover. One Australian who disappeared on 8 August as the 15th came under attack was Sergeant Joseph McKinley of Yass, New South Wales. A comrade wrote:

The men fell under furious fire. It was terrible; the men were falling like rabbits. Many were calling for mothers and sisters. They fell a good way, in many cases, from the Turkish lines. Sgt McKinley … did very good work on the Peninsula. It was commonly believed that he was killed on that morning during the advance. He was never seen again.

Harold Eustace was admitted to the 17th General Hospital is Alexandria on 11th August 1915 and the notes in his service records state "seriously wounded with a gun shot wound to the pelvis, buttock and right thigh". He later developed pneumonia and died on 7th September 1915. One month after he was wounded in the Battle of Sari Bair Range at Gallipoli. 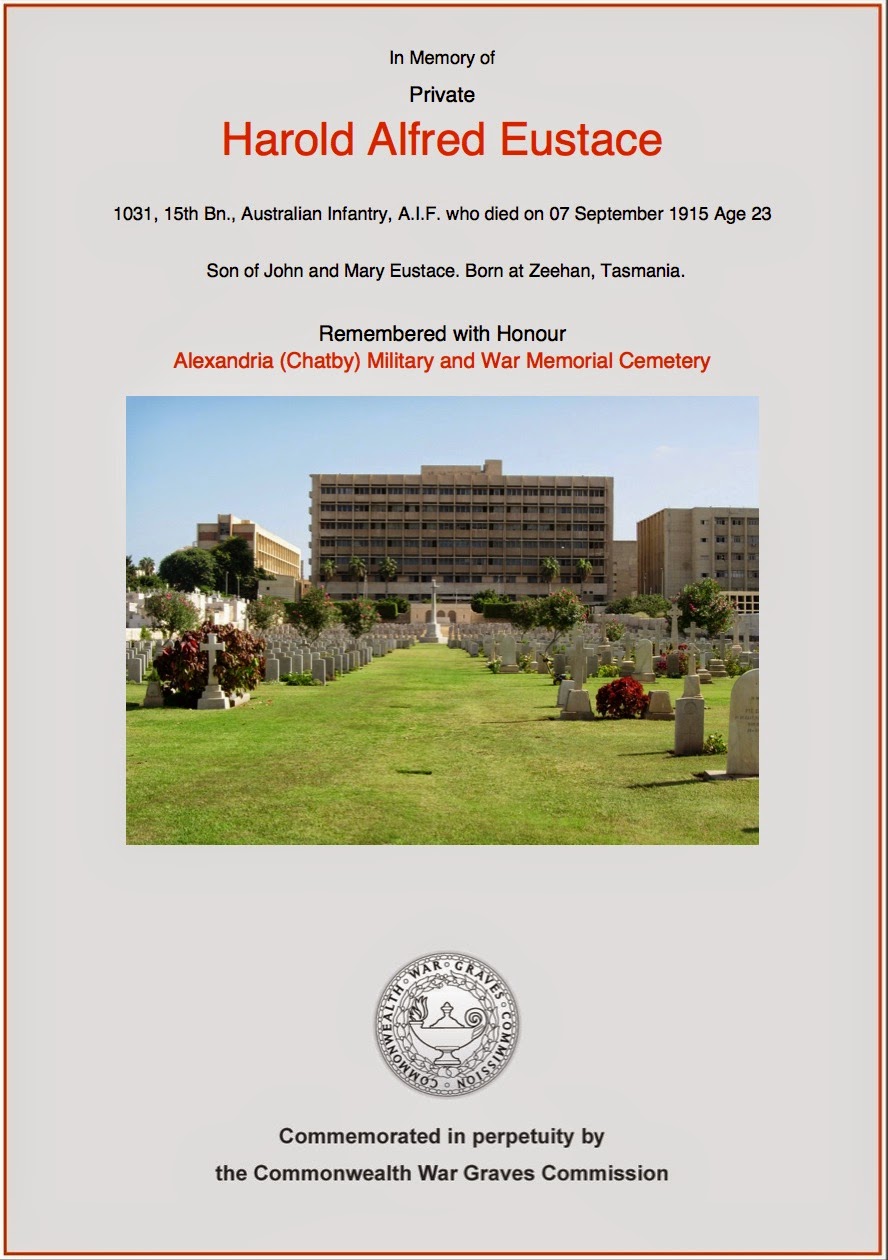 Below is a letter from his father - John Eustace of Zeehan, Tasmania - to The Minister for Defence in Melbourne requesting the date in which Harold was killed. 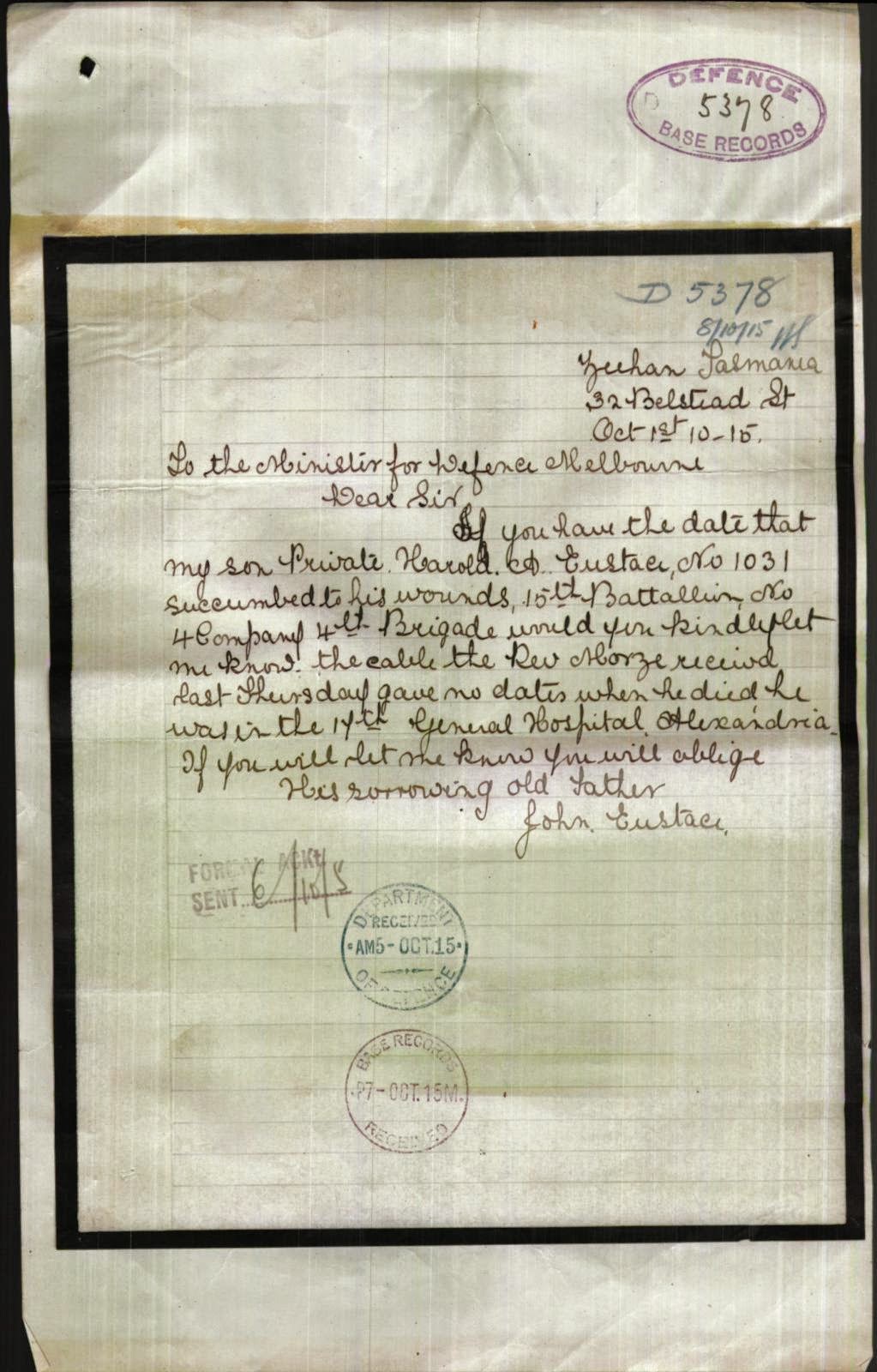 Mr. J. Eustace of Rosebery has received word from the Secretary for Defence that his son Private Harold Eustace succumbed to his wounds at the 17th General Hospital, Alexandria. The deceased went with the Second Expeditionary Force, and resided at Burnie a few years ago. He was 23 years of age. His brother, John Eustace, who has been twice wounded, is at present an inmate of the 1st Australian General Hospital, Heliopolis.

his brother - John Montague Eustace - returned to Australia after being wounded. His story will appear at a later date.

with grateful thanks to the following websites for help & support
but especially for the use of their data and images so that we can have access to
what is needed for us to remember our fallen hero's:

some history of Waratah, Tasmania

Harold Alfred EUSTACE is not directly related to myself, he is related to my two children thru their paternal line.