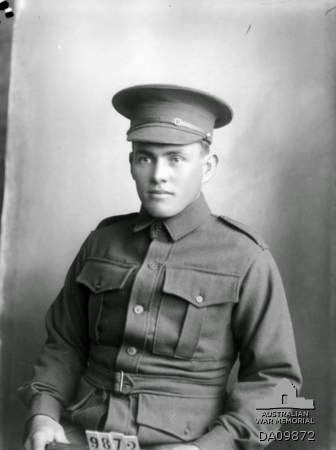 George was born in Moama in New South Wales (Australia) on 8th October 1891. War broke out when George was 22 years of age, but it was not until July 1915 that he enlisted at Echuca in the 31st Battalion and given service number 710 in the AIF. 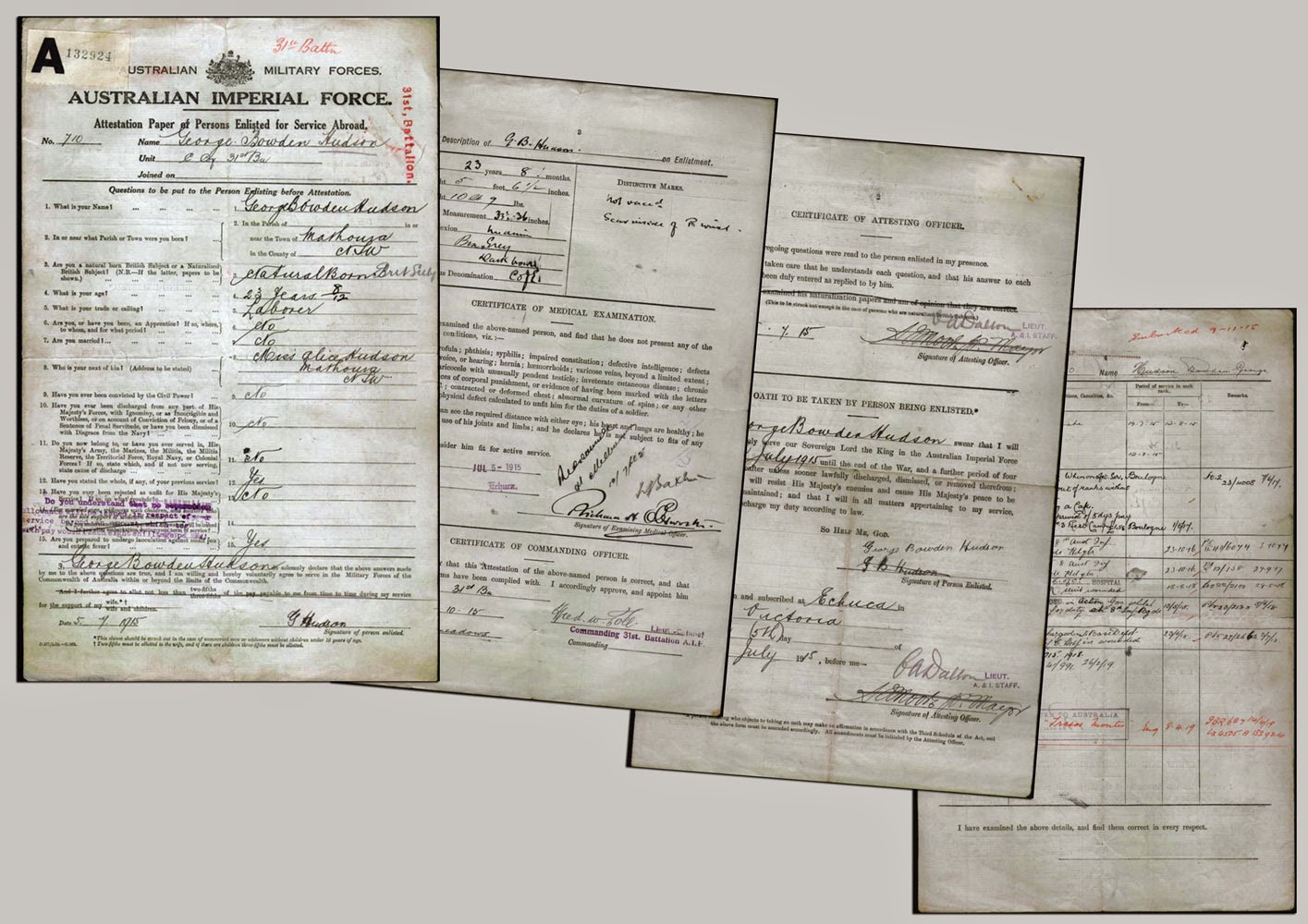 He completed his training at Broadmeadows Camp in Melbourne before departing Melbourne on board the HMAT A62 WANDILLA on 9th November 1915 bound for the Middle East. The Battalion arrived at Suez on 7th December 1915.

The 31st Battalion continued with physical training and bayonet fighting and were in the Middle East until June 1916 when it departed for Marseilles in France.  By 1st July they were at Morbecque and being put through a practical demonstration of poisonous gas and gas helmet instruction.

16th July - First of Battalion arrived at Fleurbaix (Bois-Granier Line, France) about 1430 to find billeting arrangements inadequate and incomplete. It took some time to make suitable arrangements and it was 0430 hours before last of the men were billeted.

19th July - The 31st Battalion fought its first major battle at Fromelles on 19 July 1916, having only entered the front-line trenches 3 days previously. The attack was a disastrous introduction to battle for the 31st - it suffered 572 casualties.

20th July - 0545: Captured positions could not be held so a retirement was made at 0545 back to our own lines. Very heavy casualties and men completely broken. 0900: Battalion taken out of front line and re-billeted at Fleurbaix. Estimated casualties 600 of all ranks. 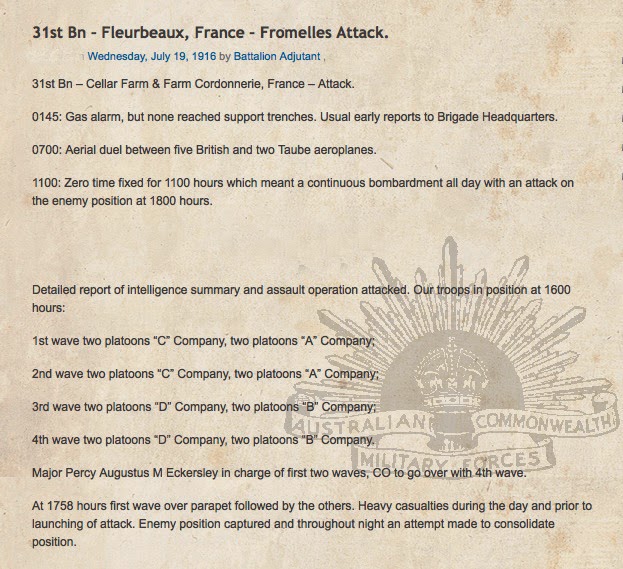 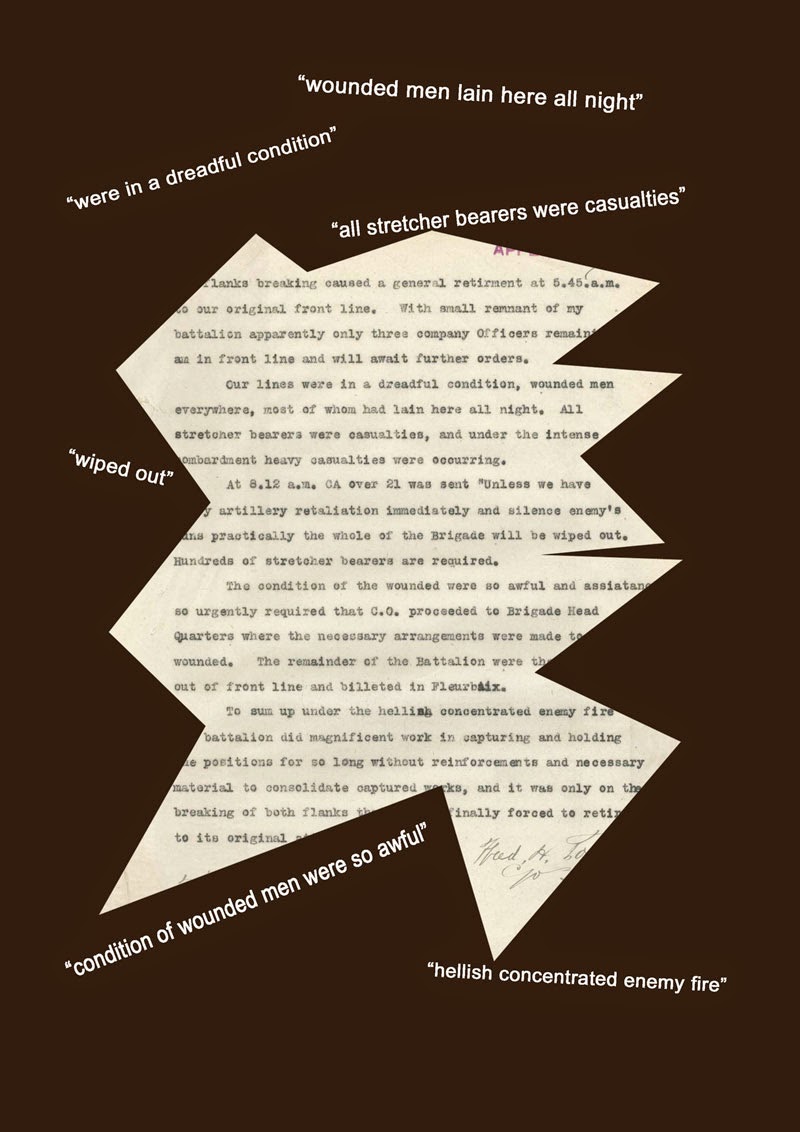 The following are just six pages of Appendix C from the diary dated 19th July 1916. 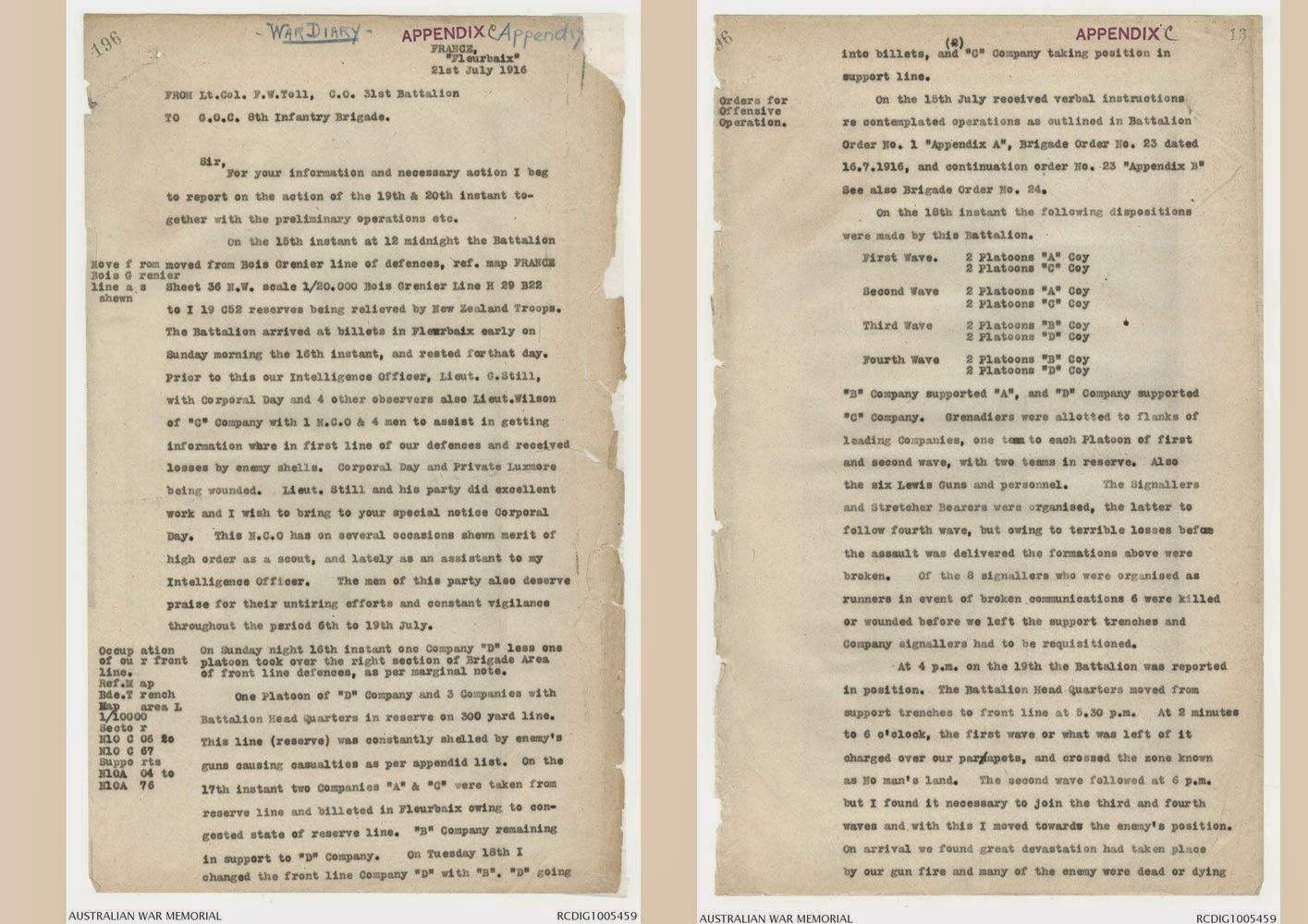 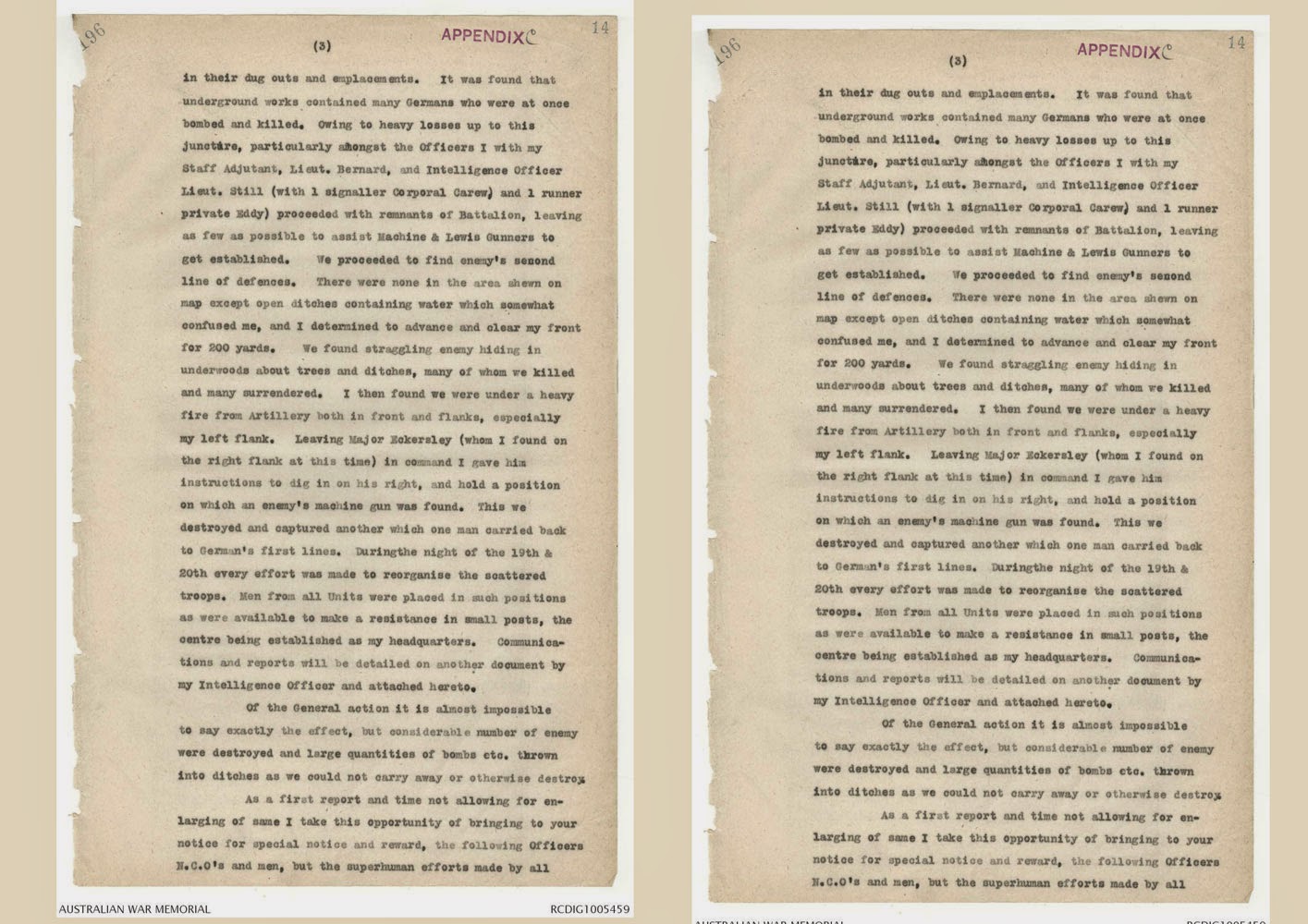 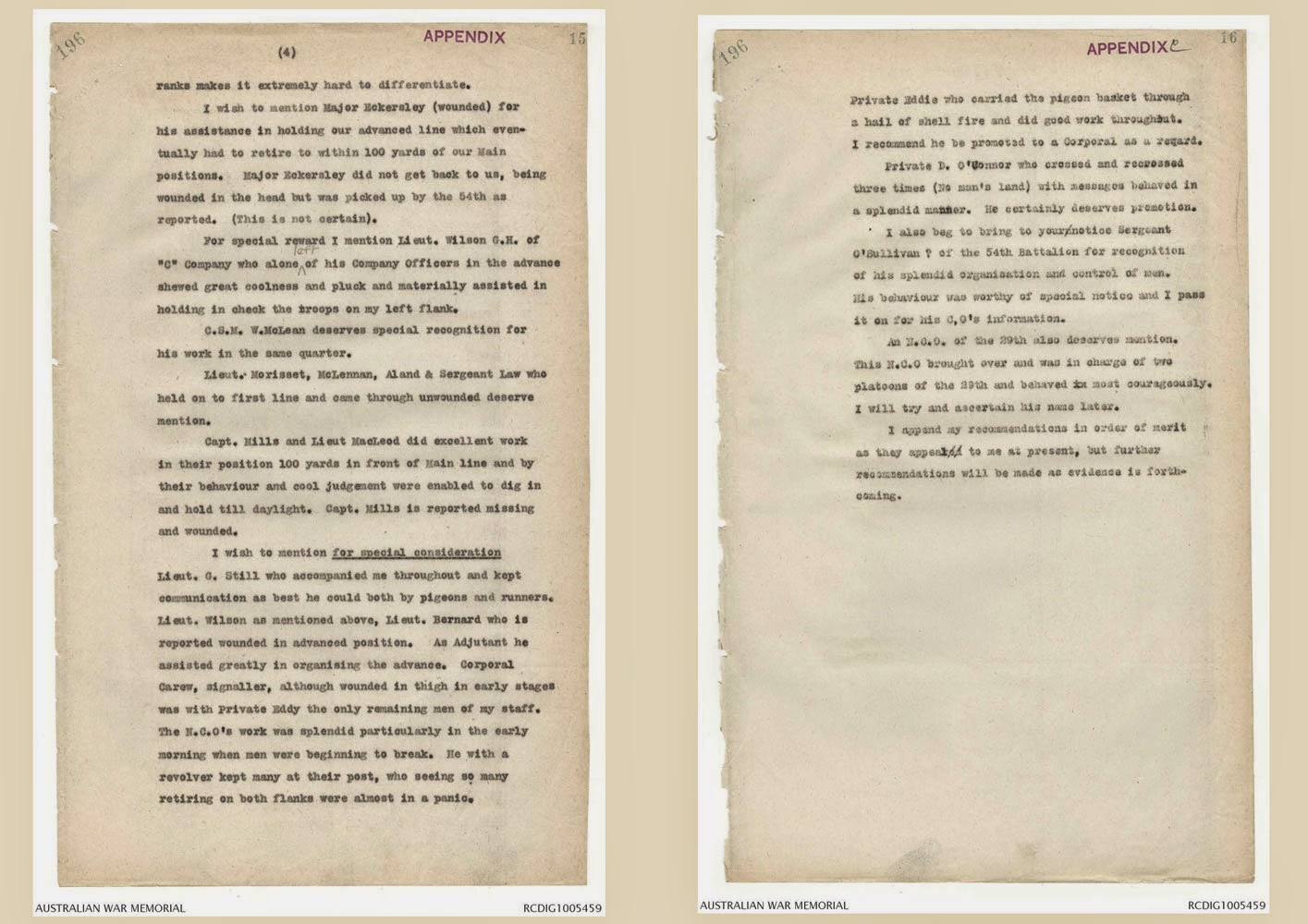 By the first week of August, George Hudson was back at Fleurbeaux in France. The Bn diary - for the 3rd August - reads as: Situation quiet. Few parties of enemy noticed behind enemy lines but in general troops well under cover. Battalion growing much more cheerful after grueling of 19 and 20 July 1916 ultimo. Foggy weather prevails in the mornings. 31 August - La Motte, France.

Day fine but roads in bad condition. Arrived Armentieres at 10.40am & settled in billets at 11am. Brigade notified. very bad condition, mud plentiful bags in parapet and communication trenches rotten and walls tumbling in.

when reading through the diaries, it seems most days the weather & conditions were intolerable....

One year later after spending much of their time around the Somme area,  the Battalion arrived at Wippenhoek, in Belgium on 19th September.

25 September 1917 - Warning Order received from Brigade that Battalion to be held in readiness to move at short notice. 10.00 pm: Battalion moved off to front line to take part in the horrendous Battle of Polygon Wood.

The 31st fought in the Ypres sector. The battle began at 5.30 am on 26 September 1917, when the British and Dominion guns opened on a 10 kilometre front. The intention was to build on the gains made during the Battle of Menin Road. The AIF 4th and 5th Divisions were responsible for a 2500-metre sector and one of their main objectives was Polygon Wood Butts, the target on the Ypres district rifle range.

wounded in action - gassed. According to the Bn diary the Artillery was active during the day. "Suggest" that he was wounded at Vaire, Le Hamel, France. 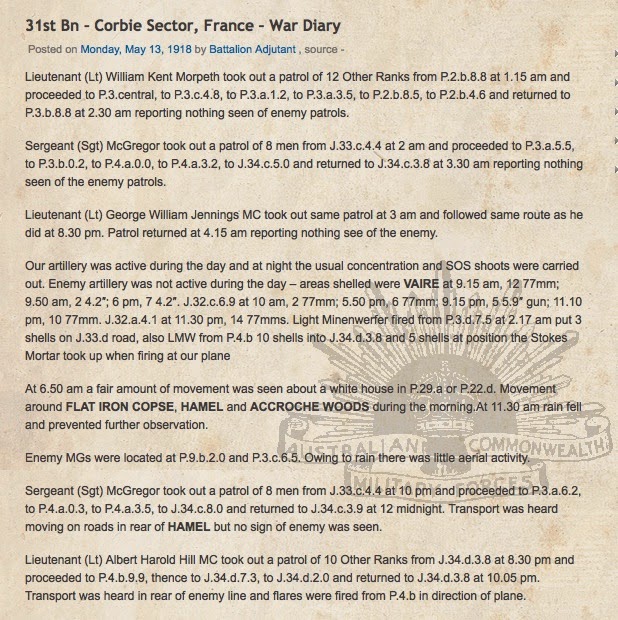 Poison gas was probably the most feared of all weapons in World War One. Poison gas was indiscriminate and could be used on the trenches even when no attack was going on.

Whereas the machine gun killed more soldiers overall during the war, death was frequently instant or not drawn out and soldiers could find some shelter in bomb/shell craters from gunfire. A poison gas attack meant soldiers having to put on crude gas masks and if these were unsuccessful, an attack could leave a victim in agony for days and weeks before he finally succumbed to his injuries. 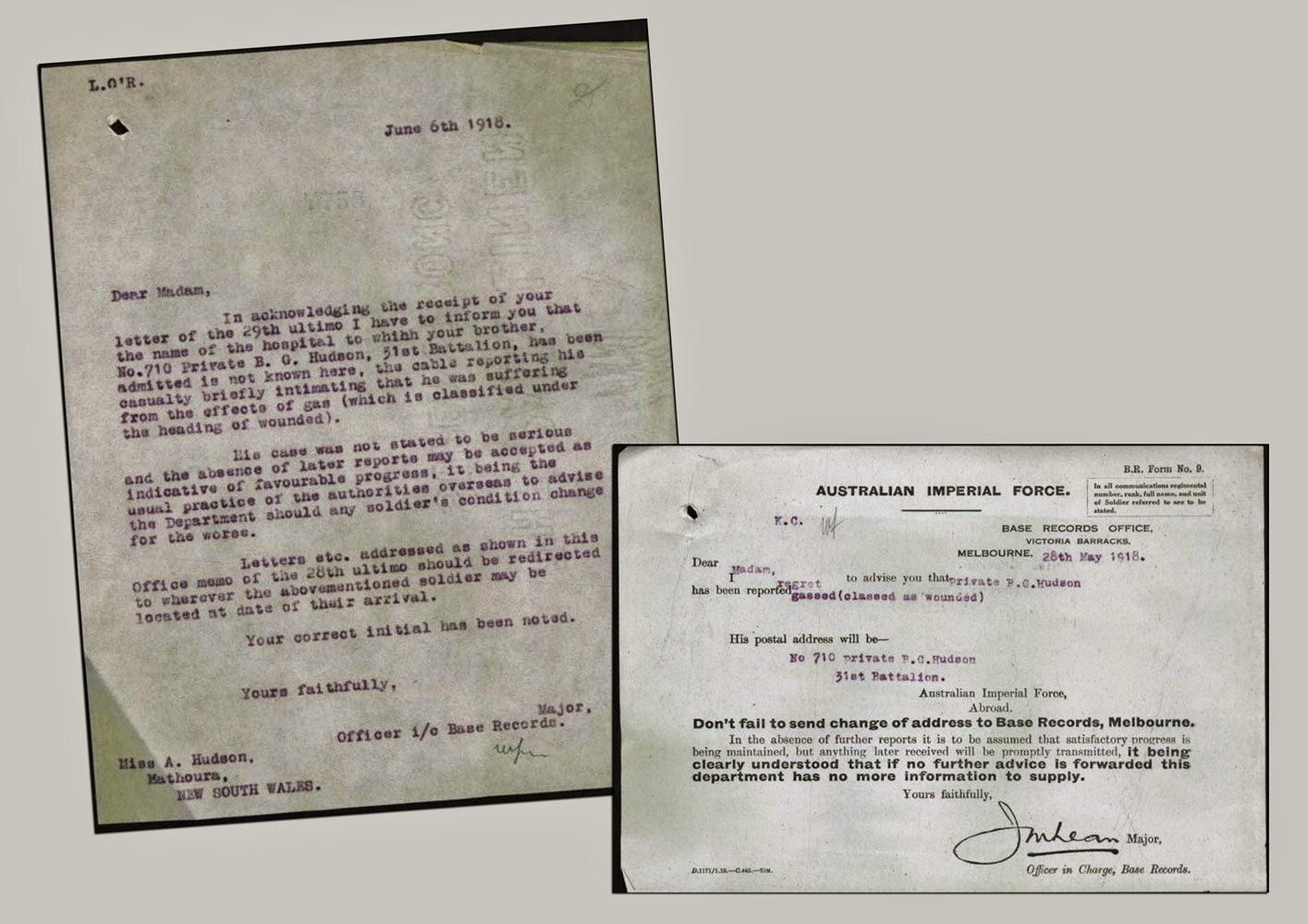 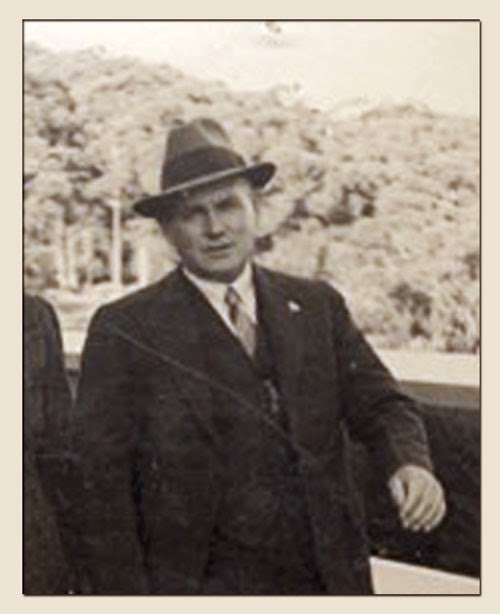 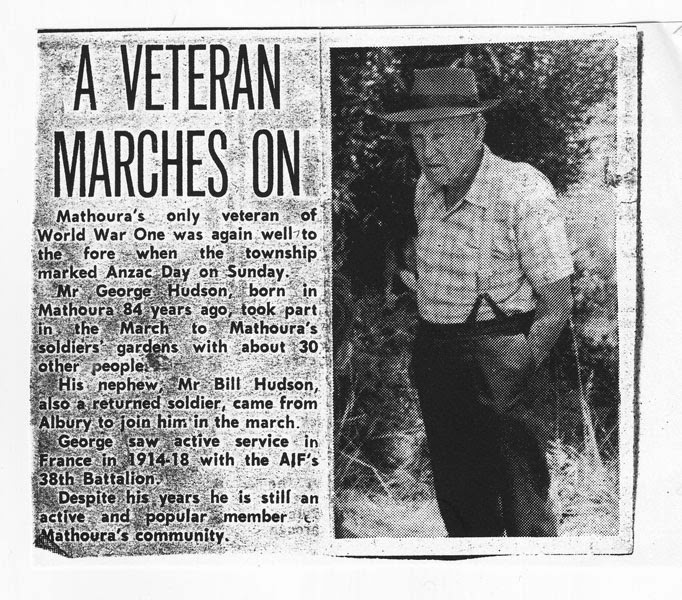 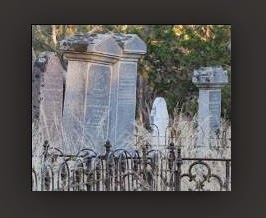 with grateful thanks to the following

for use of data and images

The War Diaries of the 31st Battalion

The Australian Embassy to Belgium

the above information on George Bowden Hudson has been collected over many years, but if anyone has any further data I would be more than happy to hear from you!

we relate through my great great grandmother:
Elizabeth Jane RICHARDS
[1837 - 1919]