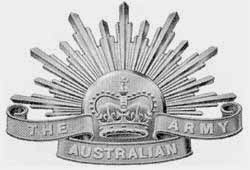 Leslie Norman KRAUSE was born 1896 in Richmond, Victoria, Australia to John Thomas KRAUSE and Eliza Jane BARTRAM. He was their sixth and last child.

Les enlisted in the Army on 24th February 1916 and departed Melbourne on board the transport ship RUNIC four months later, on 20th June 1916

There is not a lot of information on Les - anywhere - so we have picked up what we can through his service records. When he enlisted in 1916 his residence was listed as 200 Park St, South Melbourne.

His father - John Thomas Krause - had died at the age of 37 in 1897 and his mother - Elizabeth Jane Bartram - had remarried in February 1902 to Sidney Norman Ellis.

Les stated he attended the Eastern Road State School in South Melbourne, but years of that attendance are unknown as the school was only officially opened in 1909. 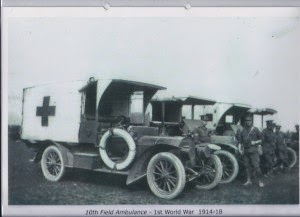 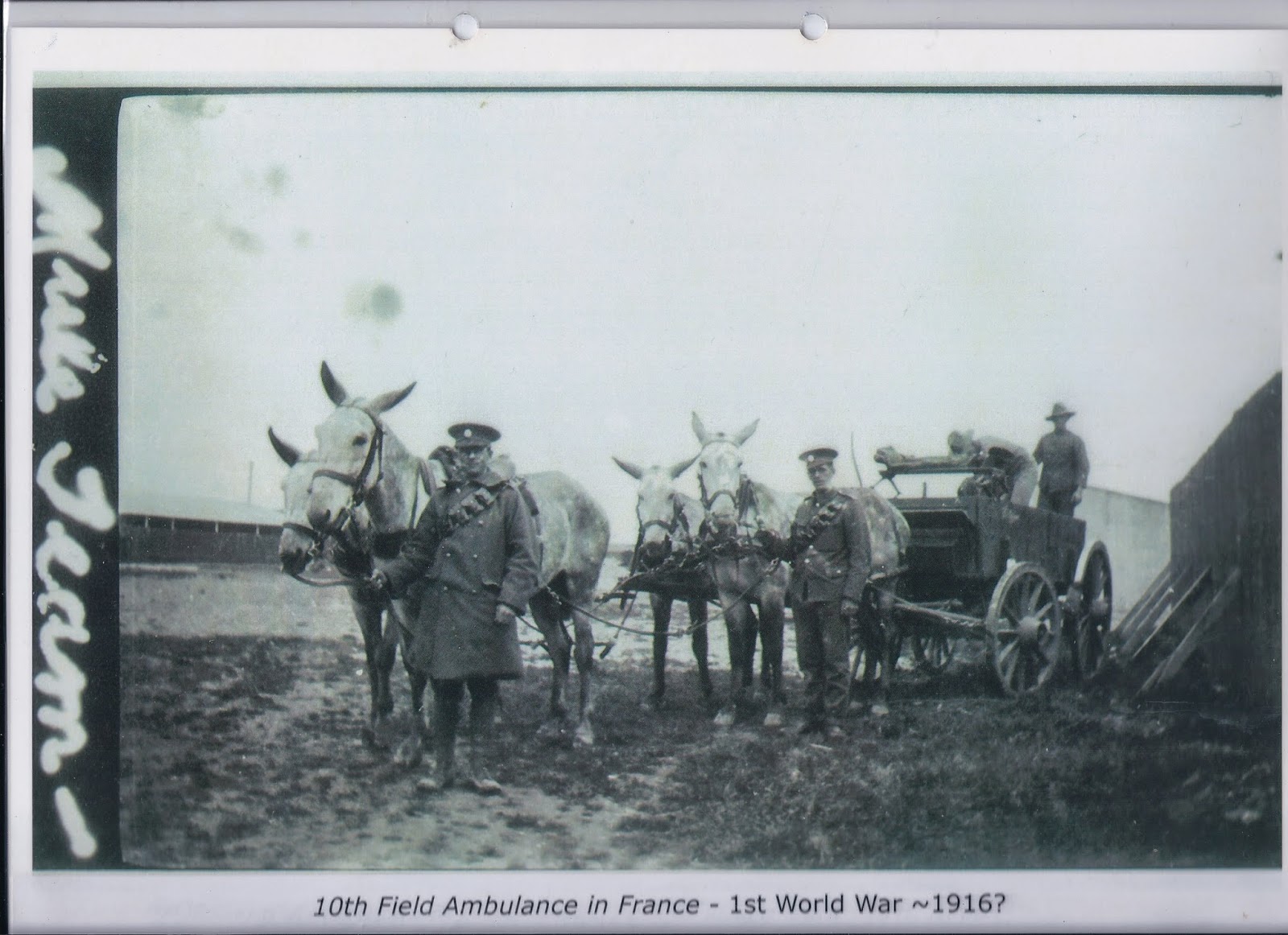 According to his service records he was a Stretcher Bearer with the 10th Field Ambulance.

By 24 November 1916 he was leaving Southampton, England and heading towards France. The next we hear of him was when he was admitted to hospital, cause of sickness not yet diagnosed as at 4th April 1917. He rejoined his unit 10 days later.

Leslie Norman Krause was killed by a "whizz bang" on 22 July 1917 in The Battle of Messines in Belgium/ Read Red Cross reports on file that are attached to this blog post. First buried at Messines Ridge, Wolverham Eendagah (sp?) Farm then at the Kandadar Farm Cemetery in Belgium. 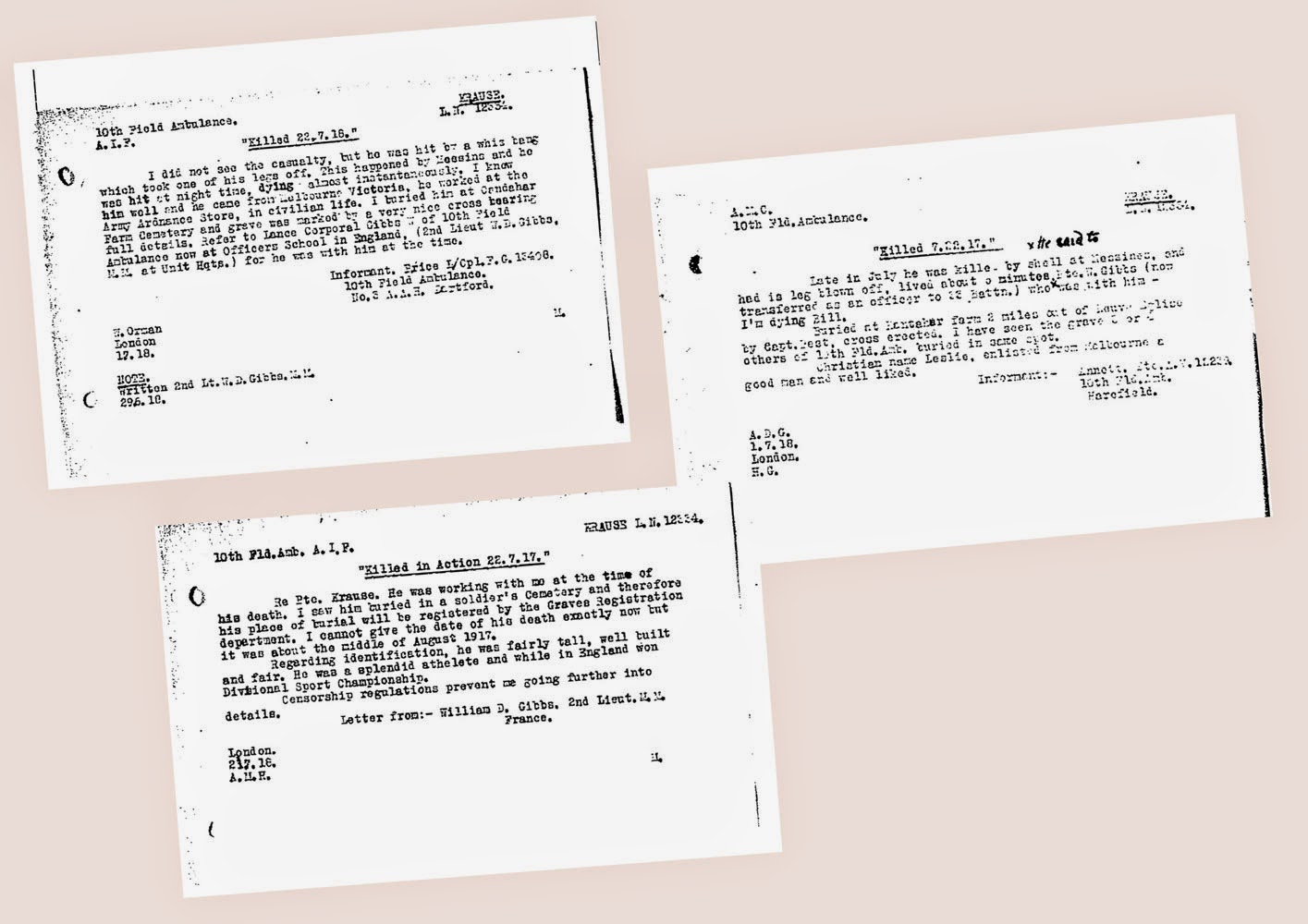 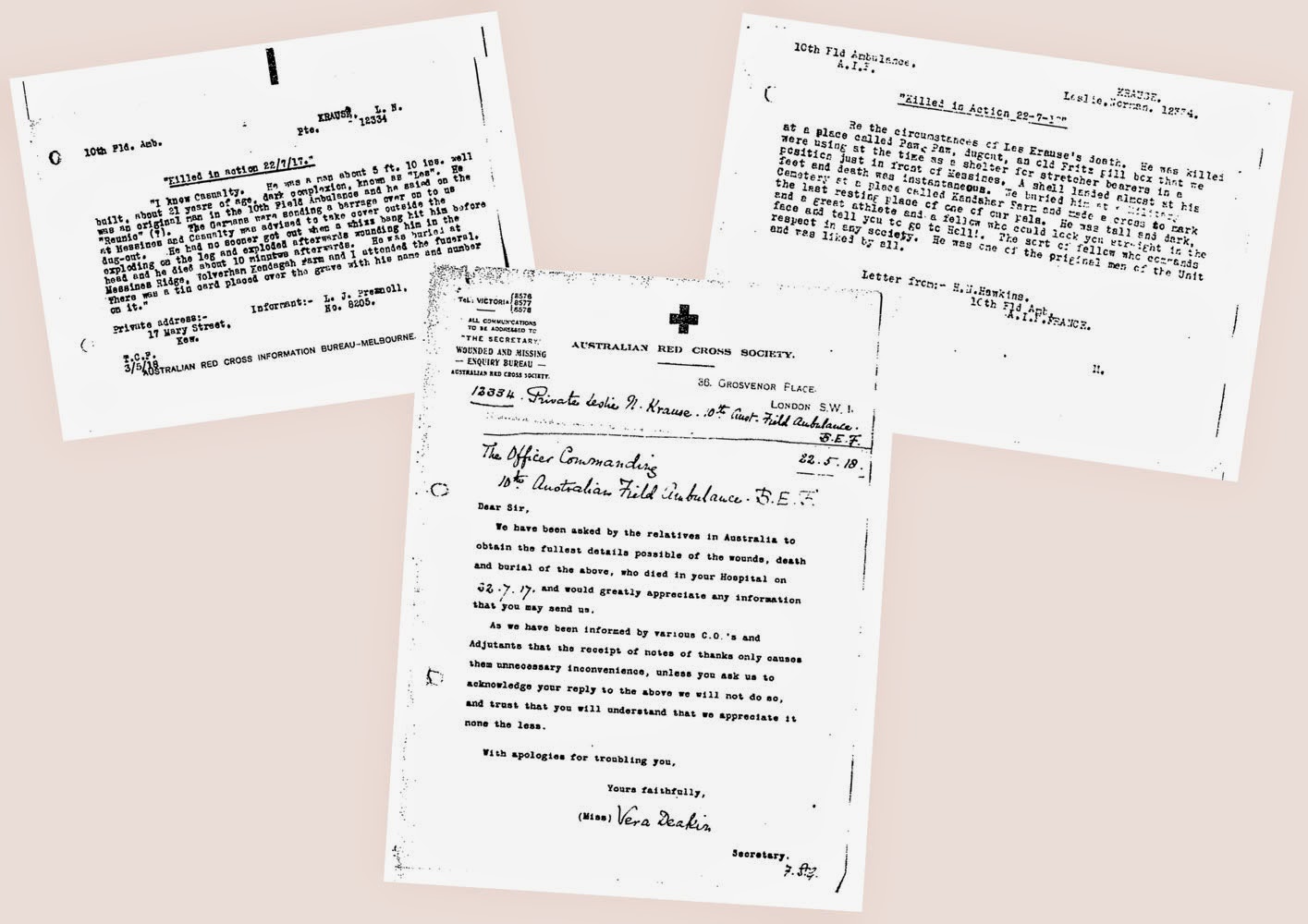 In the service records there are copies of many letters between his mother (Elizabeth Bartram) and the Defence Department. Heart breaking when you read them. This would not happen today, well I hope not!

One being where his mother has to pay fifteen shillings plus two stamps being payment for the lettering on the stone "erected on my dear laddies grave".  Then she goes onto ask if she can have  a photo of the grave.

The reply being to make contact with an 'accredited photographer' by the name of Mr. H. Kemp who will supply three copies at a cost of 7/6  (seven shilling & sixpence). 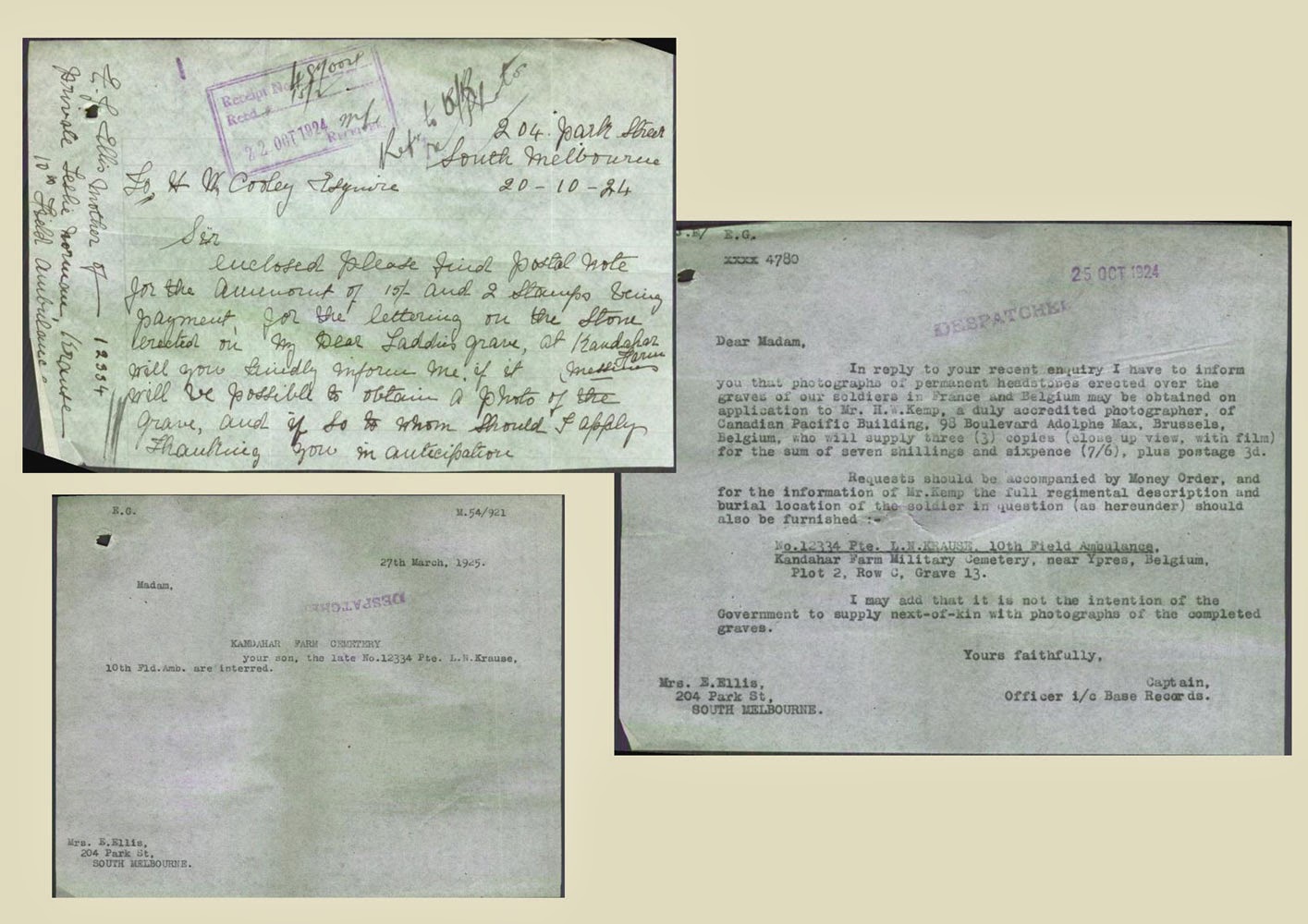 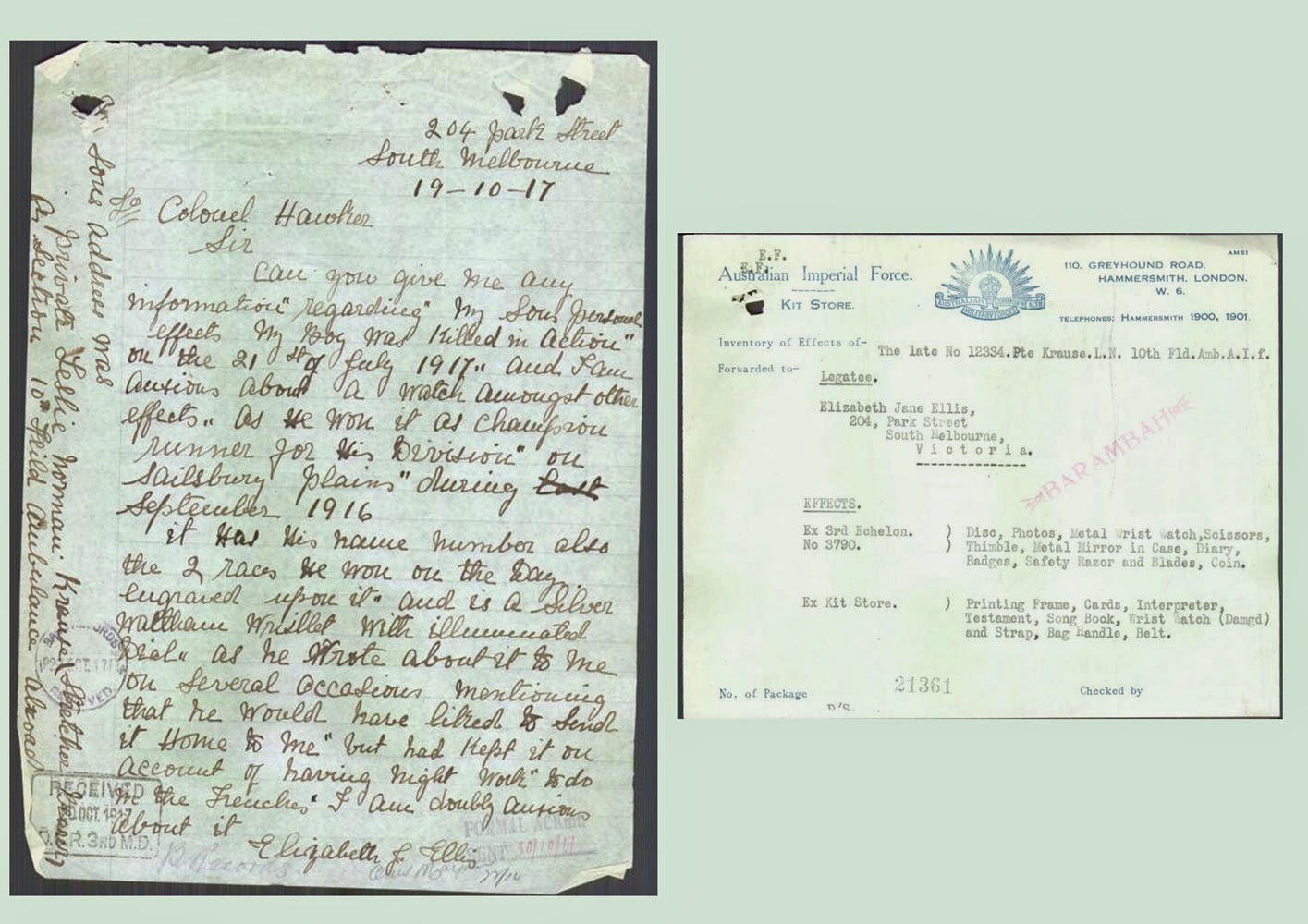 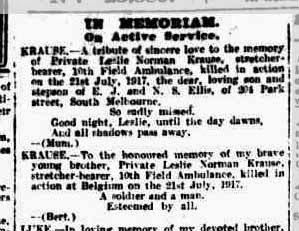 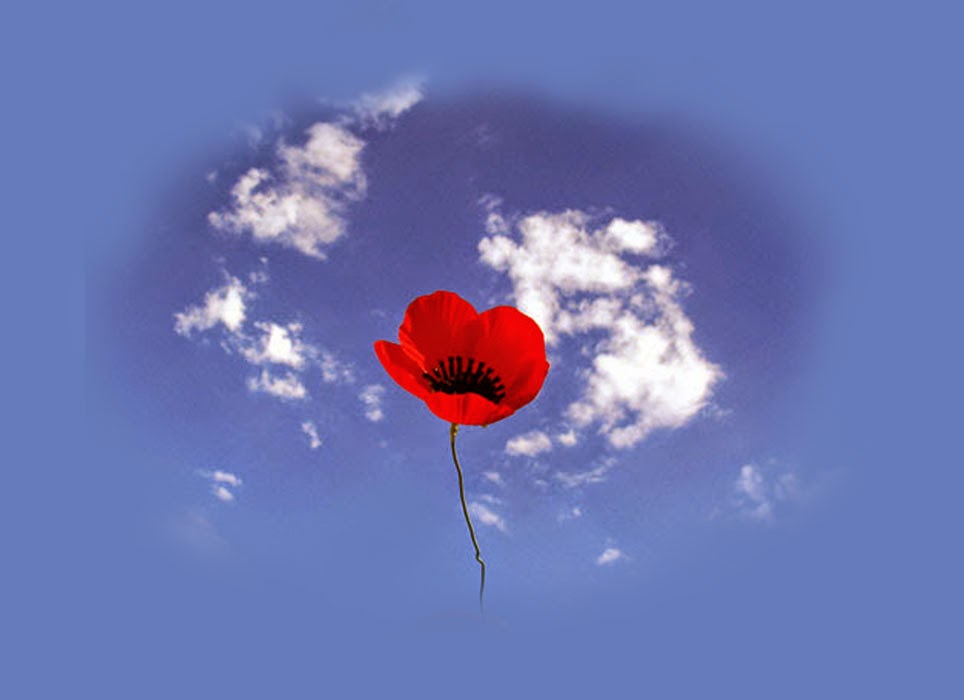 LEST WE FORGETLeslie Norman Krause's name will be projected onto the exterior of the Hall of Memory on:

The above - Leslie Norman Krause - is the cousin of following
" Bartram Brothers"
that were all KIA during WW1:


I would like to extend my grateful thanks to the AWM, CWGC and the NAA for allowing us access to their amazing collections!

I use all the above sites to gather further information for my Military History blog posts.