* PART THREE *
have now updated this post to include the name of Ernest Lister Roberts as seen on the Remembrance Wall at the Australian War Memorial in October 2013. 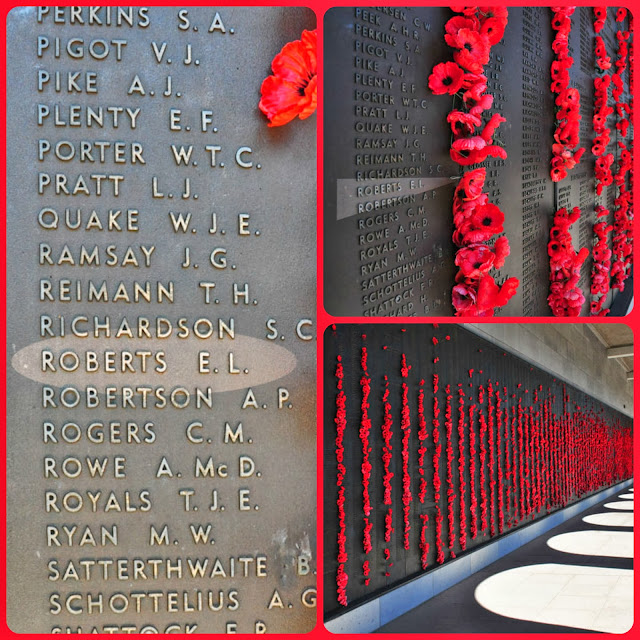 In September 1943, Australian forces launched the first phase of Operation Cartwheel, General Douglas MacArthur's advance on the main Japanese base at Rabaul.

Lae fell on 16 September, and having advanced north along the coast towards the Huon Peninsula, the Australians had the Japanese forces on the back foot. On 22 September, the Australian 9th Division, commanded by Major General George Wootten, landed at Scarlet Beach from where they began to fan out to the south and west to capture Finschhafen and to begin the advance towards Sio, further around the coast on the northern side of the Huon Peninsula, with the 2/43rd moving to Scarlet Beach early on 30 Sept and the rest of the brigade in early October. 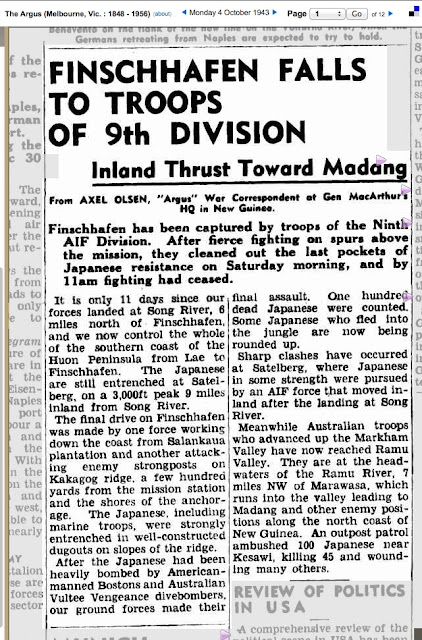 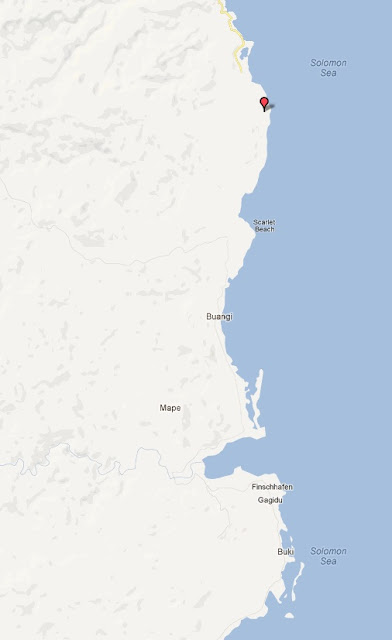 above: Bonga area is north of Scarlet Beach, where the 'pin' is located. 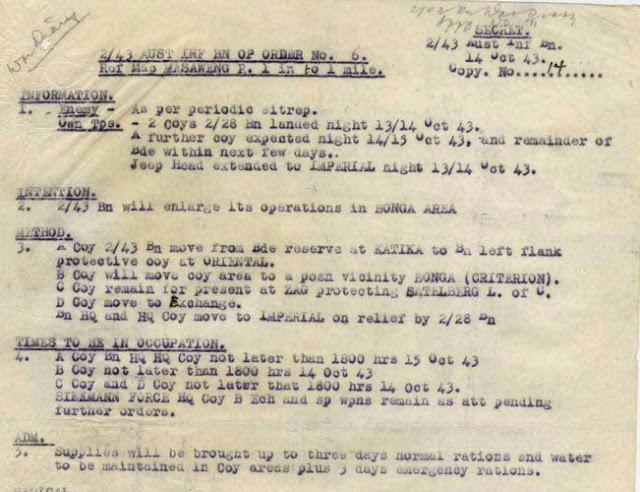 The operation orders on 17th October state that the enemy was NOT greater than 100 and believed to be NOT less than 30 in the vicinity.

In fact a force of over 5,000 Japanese troops was in the general Finschhafen-Mongi River area when the 20th Brigade landed behind them at Scarlet Beach. 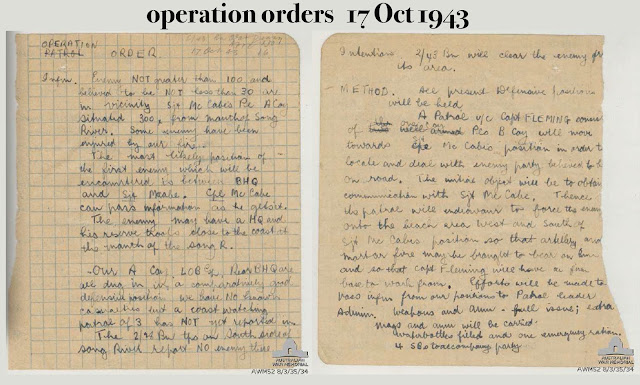 In late September, they began to patrol the area north of there towards Bonga and Gusika. Several key tracks and junctions were located by troops from the 2/43rd Infantry Battalion, who named them "Imperial", "Oriental", "Norfolk" and "Exchange", after Adelaide pubs.

Through the use of aerial reconnaissance evidence was found that the Japanese were using these tracks to traverse the area and to move supplies west towards Sattelberg. Observation posts were established and it became apparent to the Australians that one hill in particular, a feature later dubbed "Pabu" by the Australians after one of their native scouts, was the key terrain in the area.

Part of an area that later became known as "Horace the Horse" to the Australians due to its shape as viewed from the air, it was within artillery range of the Australian forward positions at North Hill and as such could be occupied and held by a small party who could then disrupt the Japanese supply line. In October, the Japanese had launched a counter-attack in the region and as the Australians had been forced back, they were forced to abandon Pabu. 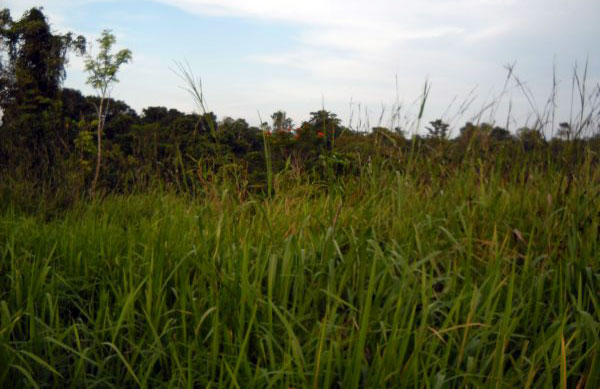 They spotted the kunai grass moving as the Japanese came into their line of fire. The agreed signal to attack would come when the Bren gun in the centre of the section fired. They waited as the moving kunai signalled the approach. When the enemy was about ten yards away, the Bren started, followed by the rest of the section. The sound in the grass was deafening as the remaining Japanese returned fire.

Suddenly, a streak of flame leapt towards the defenders, scorching some of the wet grass. Laurie had a grenade with the pin out in his hand. He let go of the handle, then counted to four and yelled, ‘Grenade,’ as he threw it at the source of the flamethrower. The explosion silenced the enemy. The Japanese withdrew through the kunai. Laurie heard the occasional burst from Owen guns as the Australians came across Japanese. They found five enemy bodies in the grass

The rest of the battalion moved into the North Hill area and completed the defences around Scarlet Beach with the rest of the 24th Brigade. The Japanese counter attack had failed and now after the capture of Lae and Finschhafen the Australian’s objective was to capture Sattelburg and drive the Japanese completely from the Huon Peninsula.

By the 19th October the PIB (Papuan Infantry Battalion) to Bonga returned to the Battalion Headquarters. They had reached the Imperial NMS, three boys then went into Bonga Village and saw 20 Japanese apparently recently arrived, dug in on the bank of the creek just north of Bonga.

Most of the 'action' around this time was confined to patrolling, that "patrolling has revealed the use by enemy of certain tracks on the high ground inland from Bonga some 1,500 yards. . . .The enemy may be withdrawing by this route, or may be supplying and reinforcing Sattelberg area from a point on the coast further north .

On 26th October a strong fighting patrol from the 2/43rd and the Papuan Battalion led by Sergeant Joy 3 found Pino Hill, Exchange and Oriental unoccupied . Near by a few Japanese who were foraging in a native garden were attacked, but the patrol itself was attacked from the rear by a band of Japanese . Next day a patrol about three miles up the
Song found a newly-occupied Japanese position. Four Papuans dressed as local natives reached a position overlooking Bonga and hid in the jungle . 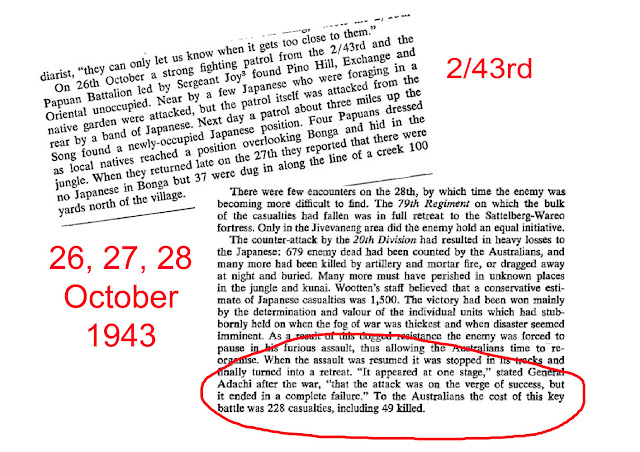 according to the Battalion Diary:

On the 27th At 1920 hrs another member of the patrol approached 5 pl posn and was injured by exploding one of our booby traps. Sjt and three came into five pls posn at 0730 hrs 28th Oct, four of our patrol still missing.

28th OCT at 0900hrs: a patrol was sent out to look for the FOUR MISSING MEN....route: via western edge of kunia (wild grass) to the vicinity of PINO HILL. (see map) Enemy still in occupation in this area. No sign of missing men found up to this point.

KIA I do believe that Ernest Lister Roberts was one of the four missing men and was killed between the Exchange Track and Pino Hill, they were attacked from the rear by a band of Japanese.

According to Army Records, he was MIA (missing in action) and later found to have been KIA (killed in action) on 27 October 1943. 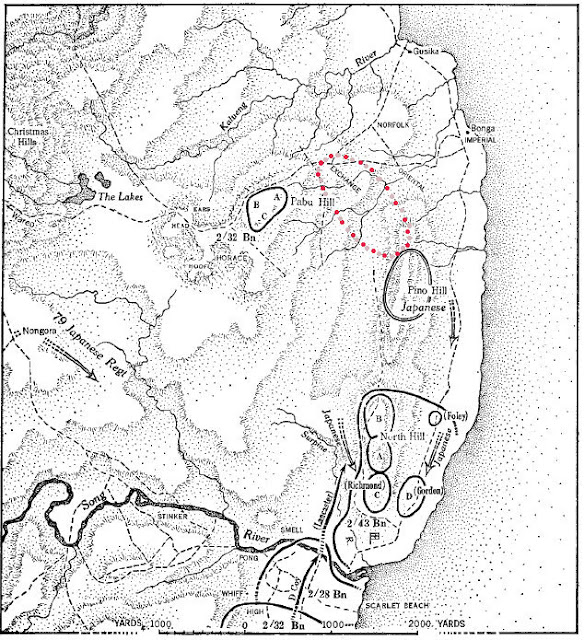 Original burial site we believe to be at Finschafen War Cemetery. Later exhumed and now at peace in the Lae War Cemetery. 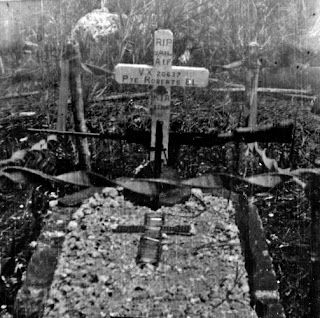 LAE WAR CEMETERY was commenced in 1944 by the Australian Army Graves Service and handed over to the Commission in 1947. It contains the graves of men who lost their lives during the New Guinea campaign whose graves were brought here from the temporary military cemeteries in areas where the fighting took place. 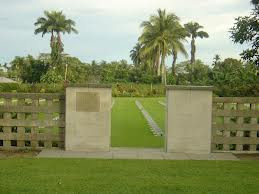 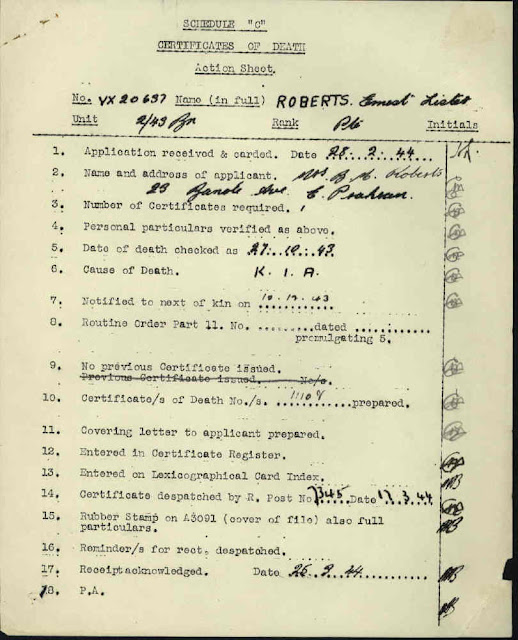 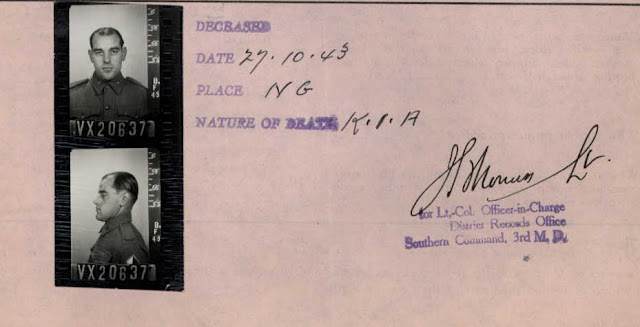 The following memorial plaque is in the Baptist Church, St Kilda, Victoria, Australia.

Erected by his loving parents, brothers and sisters. 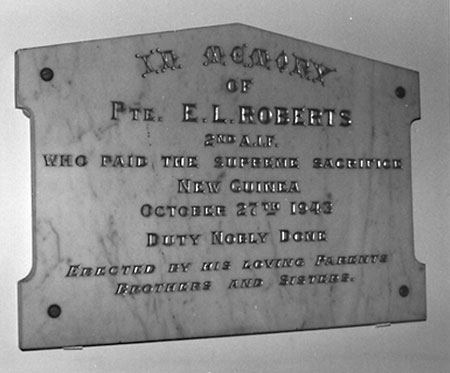 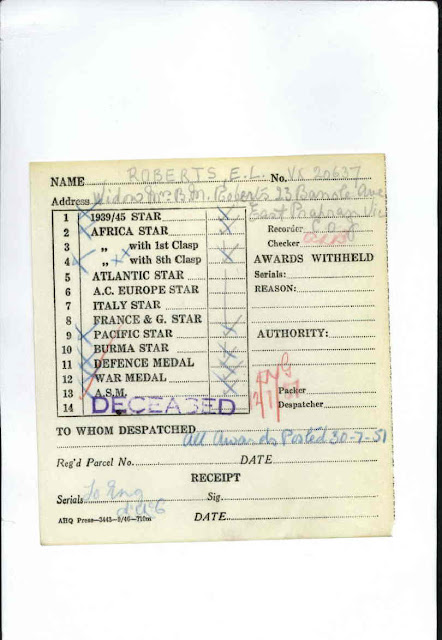 with grateful thanks to the Australian War Memorial and the Australian National Archives for the information they provide on their websites and for which I have used most images and data in the above blog post.

there are three blog posts on Ernie Roberts

the following image of the Red Poppy was taken by myself when visiting Turkey a couple of years ago, it seems appropriate to be placed here in memory of "Uncle Ernie". 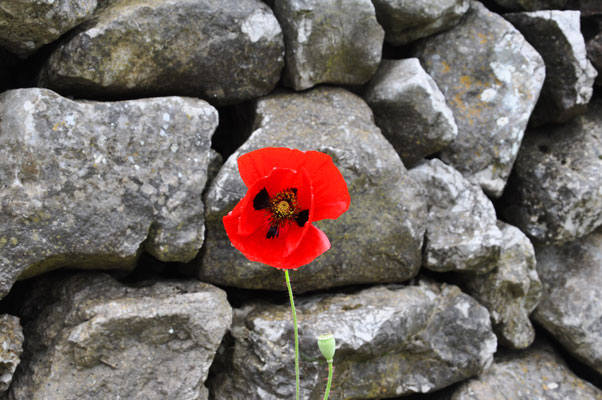