the continuing story of Ernie Roberts .... 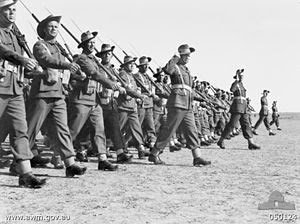 HEADING HOME
In December 1942 the 2/43rd Battalion participated in the 9th Division parade in Gaza, Egypt (see above image) before departing for home the following month. The battalion left for the Suez Canal in January and boarded troopships back to Australia. They were fairly well entertained with concerts on board, singalongs, playing cards and the 'local' newspaper titled "The Troops Tatler" which kept them up to date on events happening back home or on the war front. 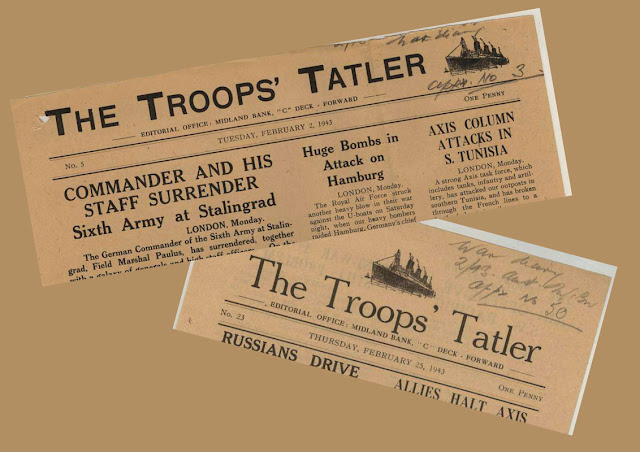 according to the 2/43 Bn War Diary, they passed through the Sydney Heads at 1255hrs and dropped anchor at 1330hrs. Disembarkation of troops started at 1400hrs and their train journey - back to camp - was at 1800hrs.

The Battalion was given three weeks leave, after which units of the division marched through the mainland capitals and received just acclaim from huge crowds ; it re-formed in the Kairi area of the Atherton Tableland in April.

A.W.O.L.
Ernie was anxious to get back to his extended family in St Kilda and Prahran and to his wife - Beryl Millicent Johnston - whom he had married in June 1940.  Unfortunately Beryl had decided that she wanted a better life and had taken up with another man. This infuriated Ernie, who was beside himself with grief.  He was AWOL many times over the next few weeks as he tried everything to 'get her back', but to no avail. He told the family that he no longer had anything to live for and would go back to the front line as soon as he could.

The family were devastated and at a loss as to what to do next. They were of course furious with Beryl and could not believe that she could do that to their "Ernie".  From that time on, they had no further contact with her.

BACK WITH THE 2/43rd
Ernie was soon back at training camp in the Gordonvale District of Queensland where he stayed for just on three months for "jungle training". 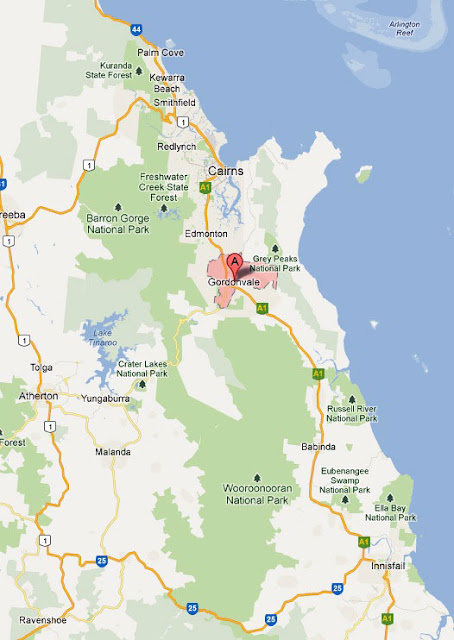 By the 7th of August the 2/43 Battalion were clearing their camp at Trinity Beach - north of Cairns - where they had been for the past few days. They were to get ready to depart the following morning.

At 0935 they had arrived at the wharf in Cairns and by 1000hrs loading and embarkation had started. The MANORA left the Cairns Wharf by 1500 and they were on their way to New Guinea..... 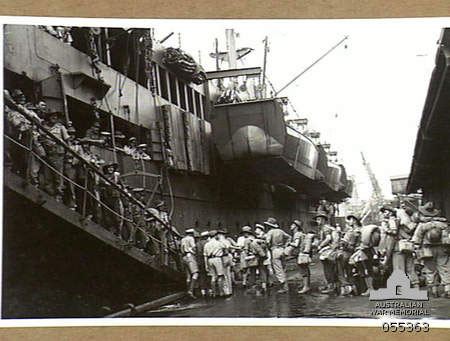 Two days later they had arrived at Milne Bay in New Guinea and immediately started setting up camp, clearing of the area and digging drains. Once that was done they started practicing embarking and debarking LCI (Landing Craft - Infantry). 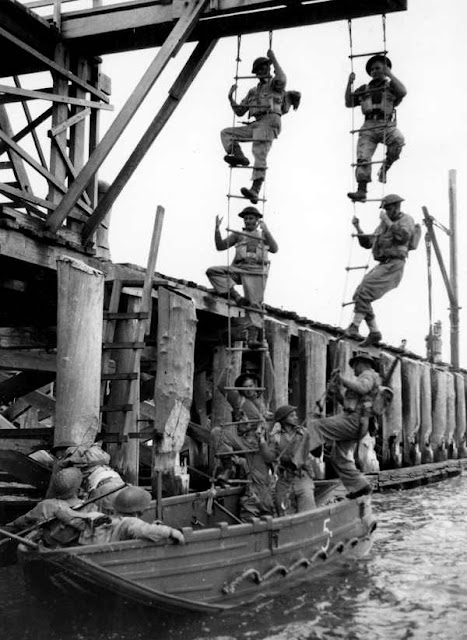 image above: LCI - Landing craft of the Australian Army. From the State Library of Victoria


and by 15th August they had moved onto the Turnbull Airfield for embarkation on LCI. With loading continuing throughout the day. Then with a convoy of 6 LCI under protection of cruiser and destroyer, moved on towards Buna.

They were soon clearing the area, establishing beach patrols and organizing their lives in Boreo as best they could under the circumstances. 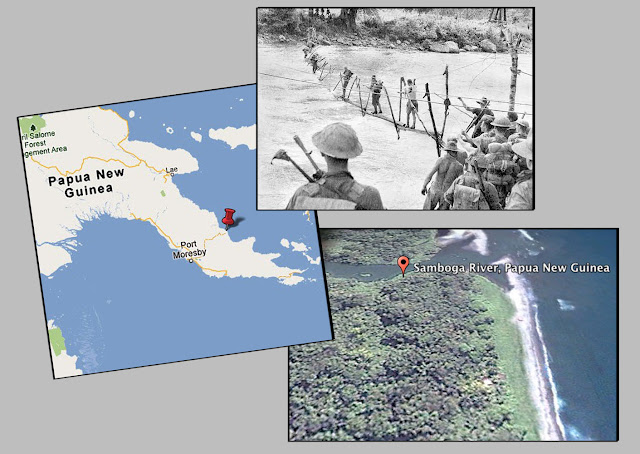 above image: location of Boreo and Samboga River in New Guinea.

Two weeks later they were crossing the Samboga River, on their way to Lae. Distance to be covered is approx 250klms. 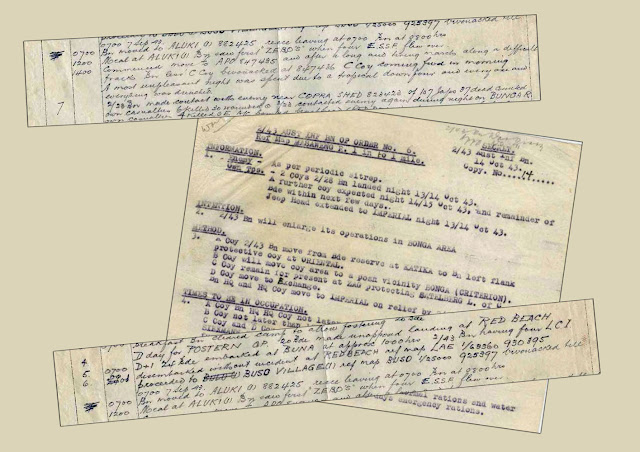 The Landing at Lae was an amphibious landing, as part of (Operation POSTERN), to the east of Lae in the Salamaua-Lae campaign of World War II between 4–6 September 1943. 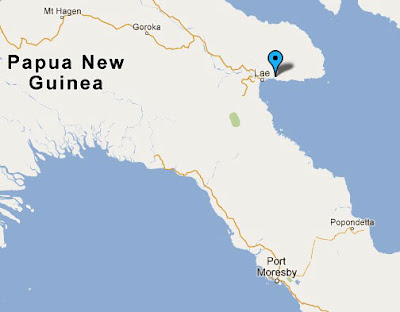 The landing sites identified were Red Beach to the east of the mouth of the Buso River and Yellow Beach near Hopoi.
The Australian 9th Division quickly established a beachhead and began a pincer advance on Lae. The amphibious landing was unopposed by Imperial Japanese land forces. Japanese bombers staged an air attack on the second wave of amphibious landings, and killed about 100 Allied naval and army personnel.

A pincer advance is a military maneuver. The flanks of the opponent are attacked simultaneously in a pinching motion after the opponent has advanced towards the center of an army which is responding by moving its outside forces to the enemy's flanks, in order to surround it. At the same time, a second layer of pincers attacks on the more extreme flanks, so as to prevent any attempts to reinforce the target unit. Most infantry combat, on every scale, is based in some fashion on this military tactic and it is commonly used by aircraft as well.


The Fall of Lae.
Between Red Beach and Lae, 16 miles away, the advancing division would have to cross five rivers and a large number of small streams. Swollen by the daily downpours of the rainy season 5 of the rivers were now fast-flowing, but, except for the Busu, which might present a problem, they were narrow with shallow banks and stony bottoms.

There were no roads in the area, only native paths. The two landing beaches were about 20 yards wide and of firm black sand, but behind them was a swamp through which were few exits.

The following shows just some of the conditions they had to deal with in this area: 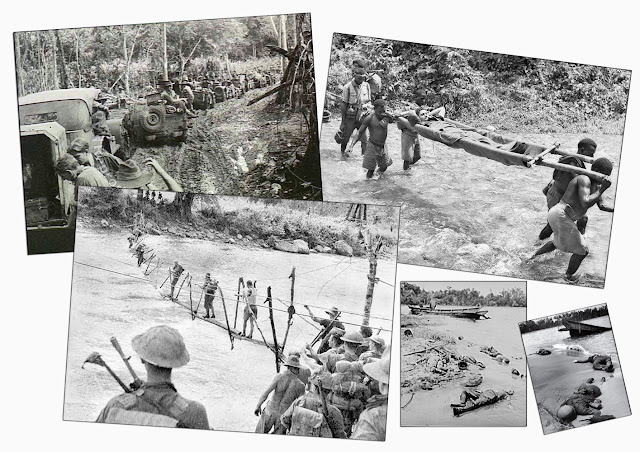 One of the unit’s historians described the next 11 days as the battalion’s most difficult, with the men crossing rivers, drenched with rain and sweat, and “Hacking their way through jungle and swamp”.

Little resistance in the early stages soon intensified after the battalion crossed the Busu River, at which point the Japanese “contested every step of the way”. The 2/43rd reached the Butibum River on the outskirts of Lae on 16 September.

Following the fall of Lae (16th Sept 1943), the Australians continued their advance north along the New Guinea coast towards the Huon Peninsula, with the aim of securing Finschhafen, where large scale air and naval facilities could be constructed for operations that were planned to be launched in New Britain.

Battle of Scarlet Beach.
On 22 September 1943, less than a week after Lae had been captured, they landed at Scarlet Beach (north of Siki Cove), south of the Song River and about 10 kilometres (6.2 mi) to the north of Finschhafen. 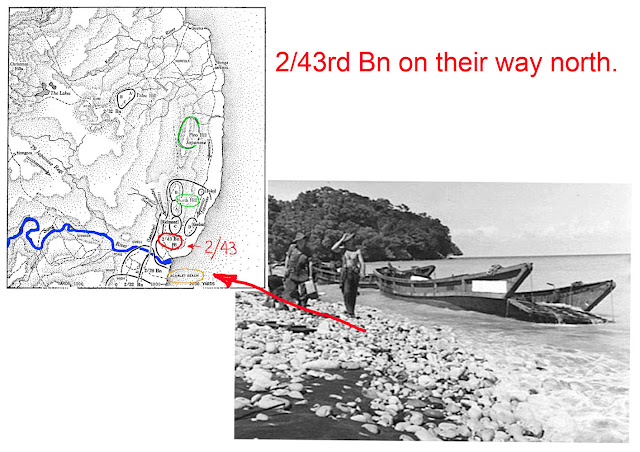 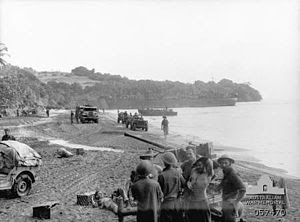 
The landing was only lightly opposed and following this, the Australians began to advance south towards Katika where Japanese resistance was stronger, but was nevertheless overcome by the early afternoon.

On 14th Oct 1943, the following orders came through:
2/43 Bn will enlarge its operations in BONGA AREA C Coy remain for present at ZAC protecting SATELBERG L. of C 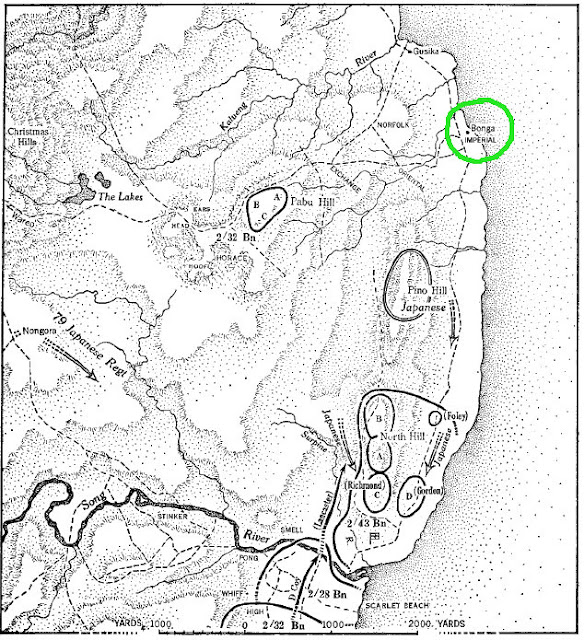 they then advance further north towards Bonga and Pino Hill.


Ernest Lister ROBERTS was KIA on 27 Oct 1943
with grateful thanks to the Australian War Memorial
and the Australian National Archives for the information they provide on their websites and for which I have used most images and data in the above blog post.