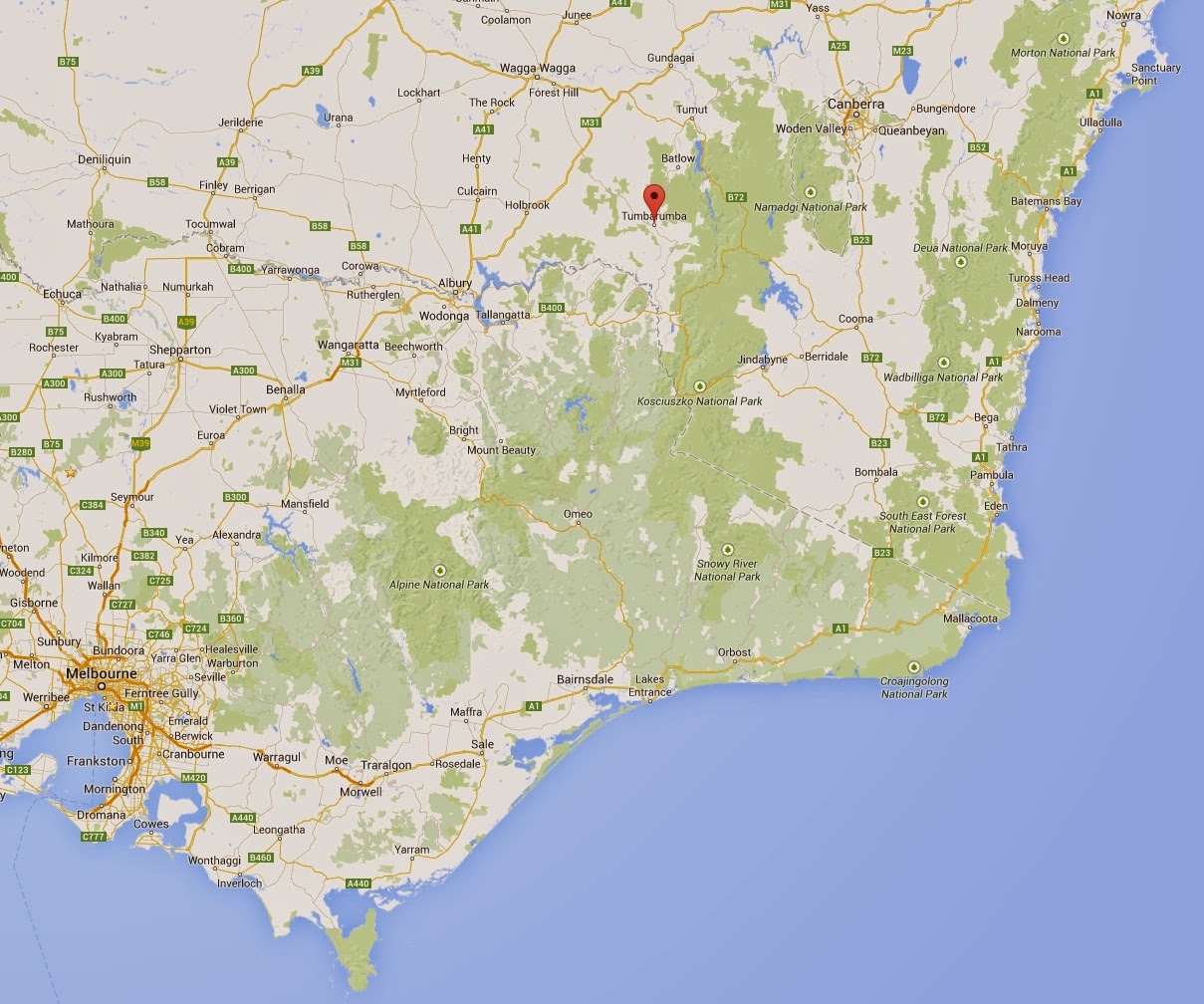 By the age of 20 years (& 5 months) Samuel had enlisted in the 5th Battalion AIF in Melbourne.  Both parents had given written consent.  His enlistment papers record that his eyes were grey, his complexion fair and his hair light brown. His occupation was that of a saddler (one who made saddles, harnesses, horse collars, bridles, etc.) and his religion was listed as Presbyterian. 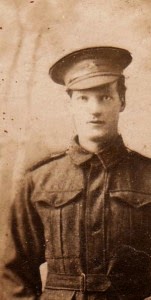 After training was completed at Broadmeadows Army Camp, Samuel embarked Melbourne on board the HMAT NESTOR on 11th October 1915 bound for the Middle East via Fremantle (West Australia)

William Le Brun - another family member, but unknown to each other - departed Melbourne on board HMAT A71 "Nestor" on 11 October 191. William was in the 7th Battalion

HMAT NESTOR arrived in Fremantle at 11:35 am on Sunday the 17th, but the diggers weren’t allowed ashore and only stopped long enough to offload four chaps who were quite ill. There had been an outbreak of measles and other disease's in the preceding days. All were given vaccinations once underway.

By October 31st they were already in the Gulf of Aden and entered the Red Sea on the 1st November. On the 4th of November at around 10:00 pm, they anchored about 3 miles off Suez. Unfortunately one of the cooks didn’t quite make it there and died just the day before and was buried at sea.

With the excitement of their arrival though, and the beauty of the bright lights on shore, everyone was in high spirits however they weren’t to disembark until the morning of the 6th. The ensuing train trip to Heliopolis took another seven long hours arriving at 5:30 pm.

Despite their arduous journey, they went into Cairo that night to be greeted by ‘a filthy place’ and ‘natives [who] try to take you down.’

Generally, it was hot and dusty most of the time and money was scarce.  By the end of November (1915) bayonet drills had been common and there was talk of the possibility of an uprising against them from the locals.

On 4th December (1915) Samuel was admitted to the 4th Auxiliary Hospital in Abbassia with mumps. There were multiple hospitals for the armed forces at Abbassia, including the No. 4 Auxiliary Hospital and the 3rd and 14th Australian General Hospitals. The former was of smaller size than the General Hospitals, and the inside view of a ward in 1916 is shown below with patients, nurses and doctors.

Abbassia is a neighborhood in Cairo, Egypt.


By March 1916 Samuel was at the Garrison Camp at Zeitoun in the Reserve Brigade awaiting orders to be dispatched to Europe. He embarked Alexandria in Egypt for B.E.F. (British Expeditionary Force) on 29th March 1916 and disembarked at Marseilles on 4th April.

By the first week of June (1916) he was 'taken on strength' from the 5th Battalion into the 1st Pioneers Battalion. 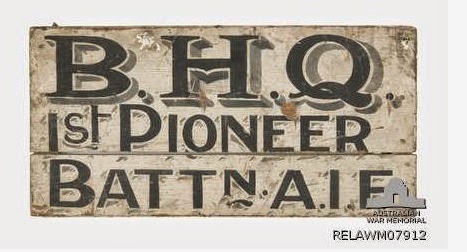 Samuel Naismith and the rest of his Battalion found themselves in the Front Line right in The Battle of Pozieres...

For three days, 24 to 26 July 1916, the Germans relentlessly bombarded Pozières. The aim of this concentrated shelling was not simply to prepare for a counter–attack but to inflict as much damage and loss on the Australians as possible.

Also shelled were the approaches to the village, by which vital supplies entered and hundreds of walking wounded and stretcher–bearers carrying the severely injured exited. One of these approaches was the ‘sunken road’, which reached Pozières from the countryside to the south–west on the other side of the main road just opposite First Australian Division Street. Enemy shells rained down on the village’s main street and along the ‘sunken road’ for most of 24 July.

the Battalion left billets in Dernancourt at 1400 hours & proceeded to Pommiers Camp arriving at about 1730.

" ..... and worming its way on foot through traffic for another ten miles in the afternoon, turned off the crowded road at dusk into a muddy plateau known as "Pommiers Camp", near Montauban. Here, as no cover was available for three quarters of the men, the majority slept in the open, improvising what shelter they could with their blankets and water-proof sheets. Little rain had fallen since the previous day, but there was a heavy frost and the ground was wet ... " 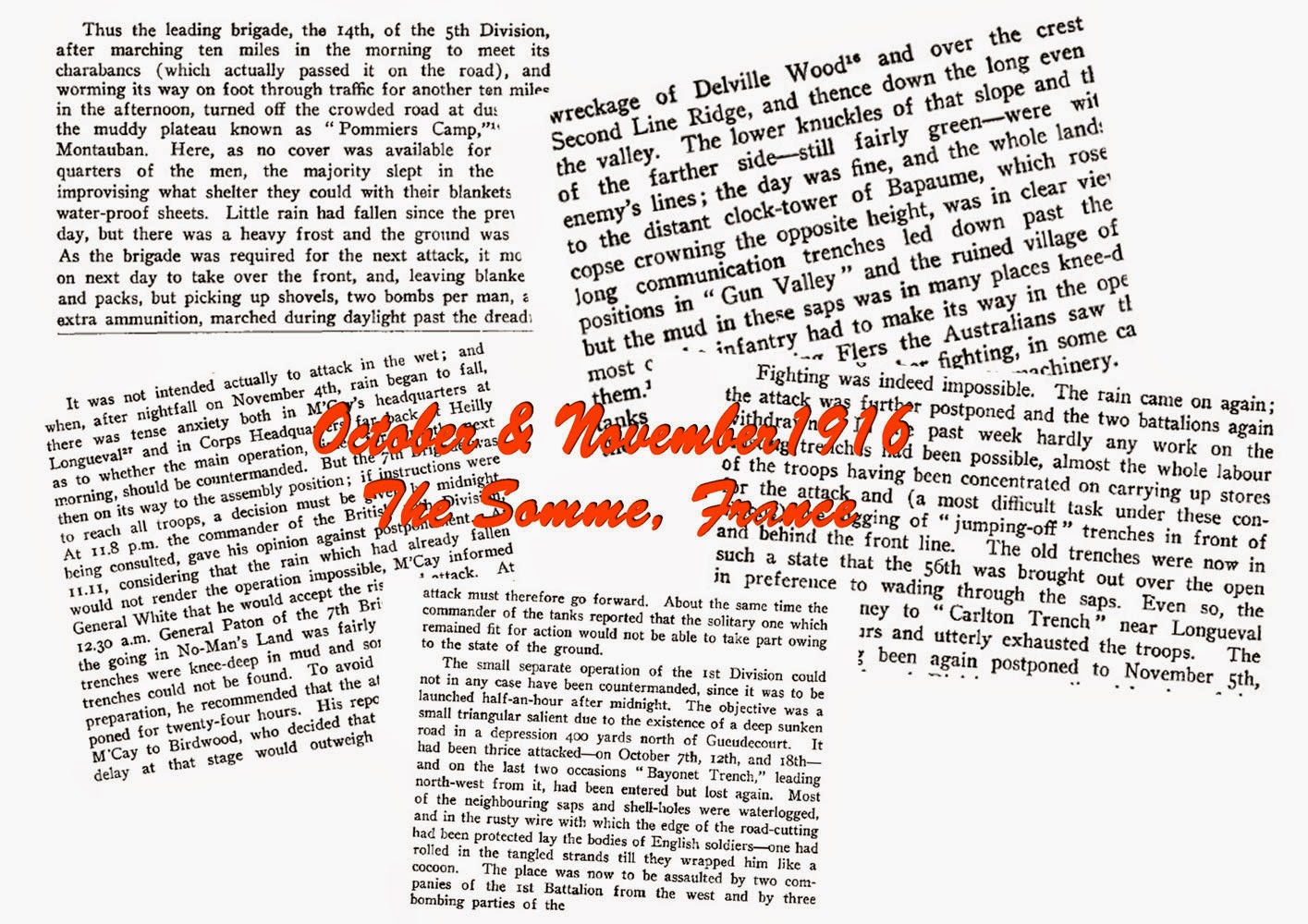 The end of the Somme, Nov 1916 The worsening weather & physical destruction of the battlefield made life hellish for attackers & defenders alike. So October and November saw the two last attacks, The Battle of Transloy Ridges and Battle of the Ancre.

during the Battle of Transloy Ridge in France, Samuel was wounded in action, in the field with a GSW (Gun Shot Wound) to the leg, wrist and back. On the 12th he was moved to England for medical treatment and by the 16th he was being admitted to the 2nd Southern General Hospital with severe GSW to the left leg.

Samuel Naismith was at Perham Downs for rehab. Perham Downs was an AIF army camp on the edge of the Salisbury Plain in England, and Sam reported there after being at Furlough.


This was when his father - also named Samuel James Naismith - enlisted in the AIF and embarked Melbourne on 11th May 1917 heading towards Europe.

After spending sometime at Perham Downs recovering from his injuries, Samuel was attached to the 15th Training Battalion at Hurdcott, near Fovant in Wiltshire. But by October he proceeded to rejoin his unit - 1st Pioneer Battalion - at Havre, in Belgium.

The Battle of Yrpes and a major Battle in which the 1st Pioneer Battalion took part.

The Battalion was sending it's companies up to the front lines - a distance of 8 klms - from Godezonne Farm, digging and repairing trenches, MG pits, shelters, etc. During the month of March they had 2 that were killed and 65 wounded performing these duties.

Battalion moved by march route to Tincourt area of France. 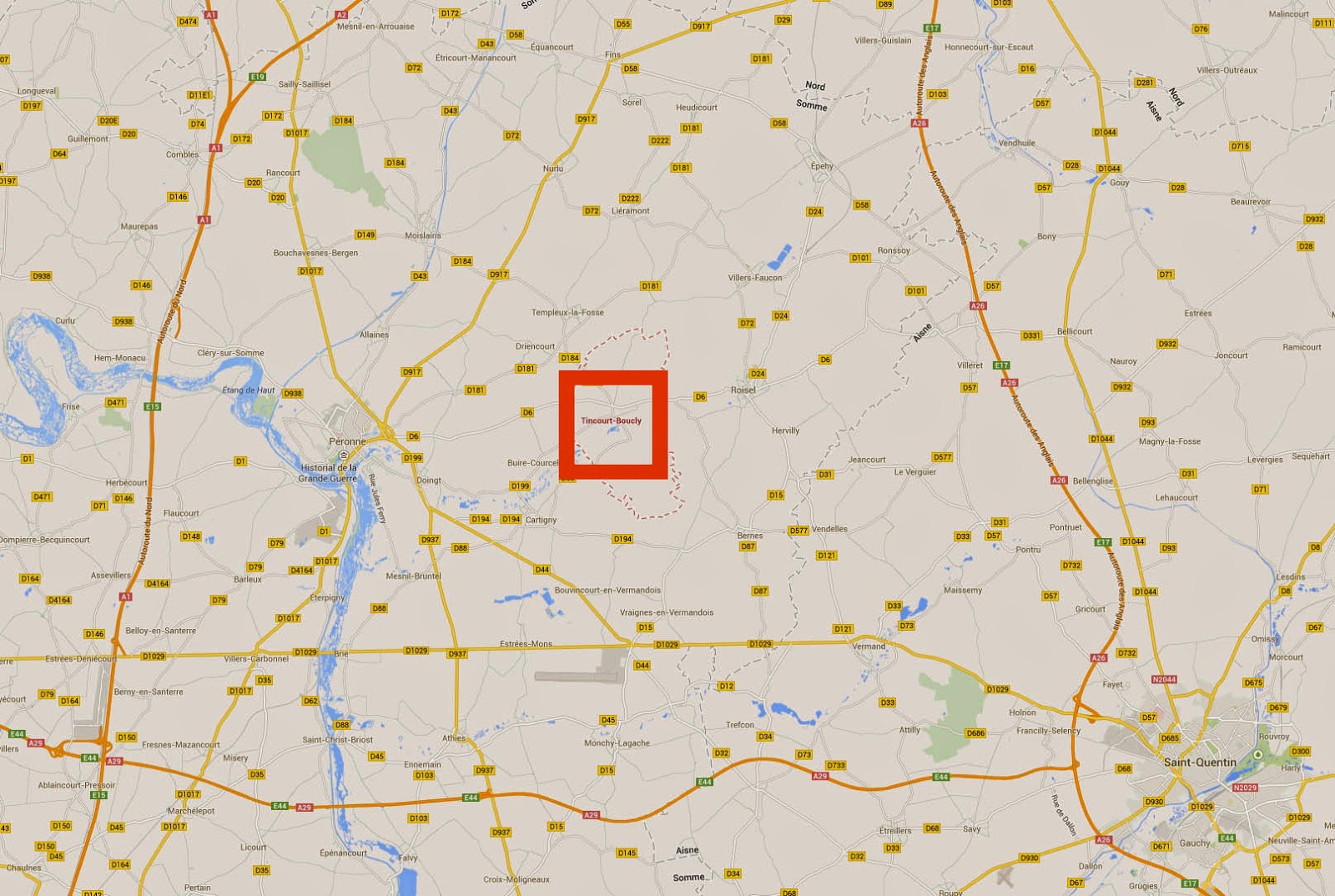 Samuel James Naismith was Killed in Action:Tincourt, Somme, Picardie, France
KIA - enemy mine.
The 1st Pioneers Battalion were doing general road repairs and two diggers (one being Samuel) were killed by an explosion of enemy 'booby trap' 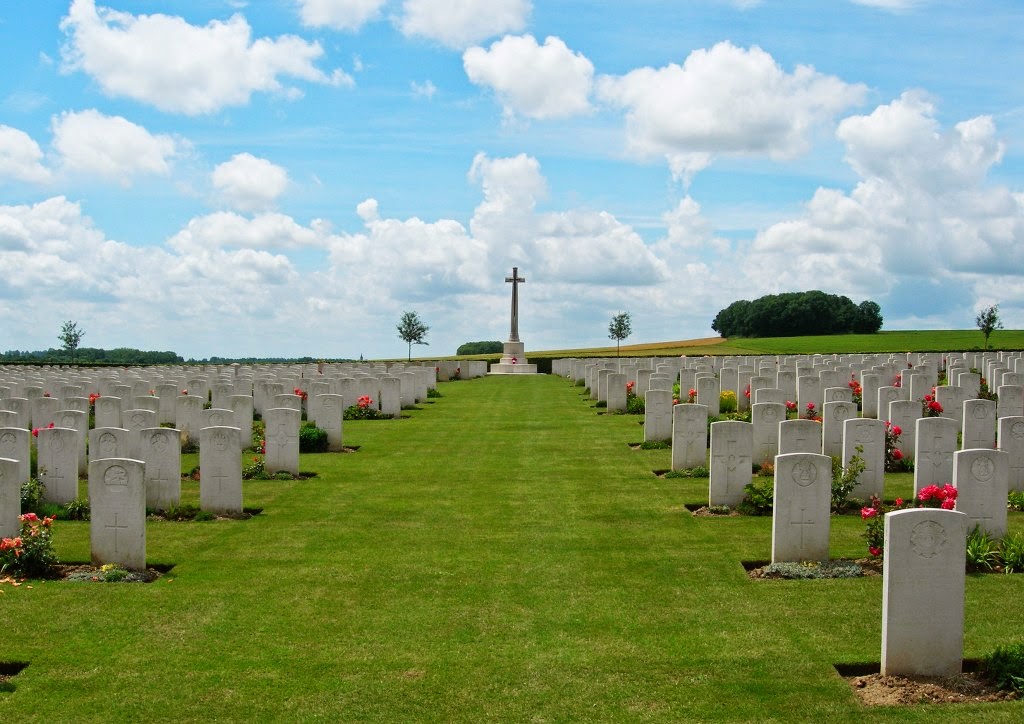 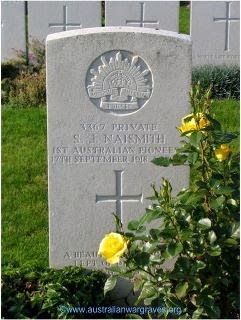 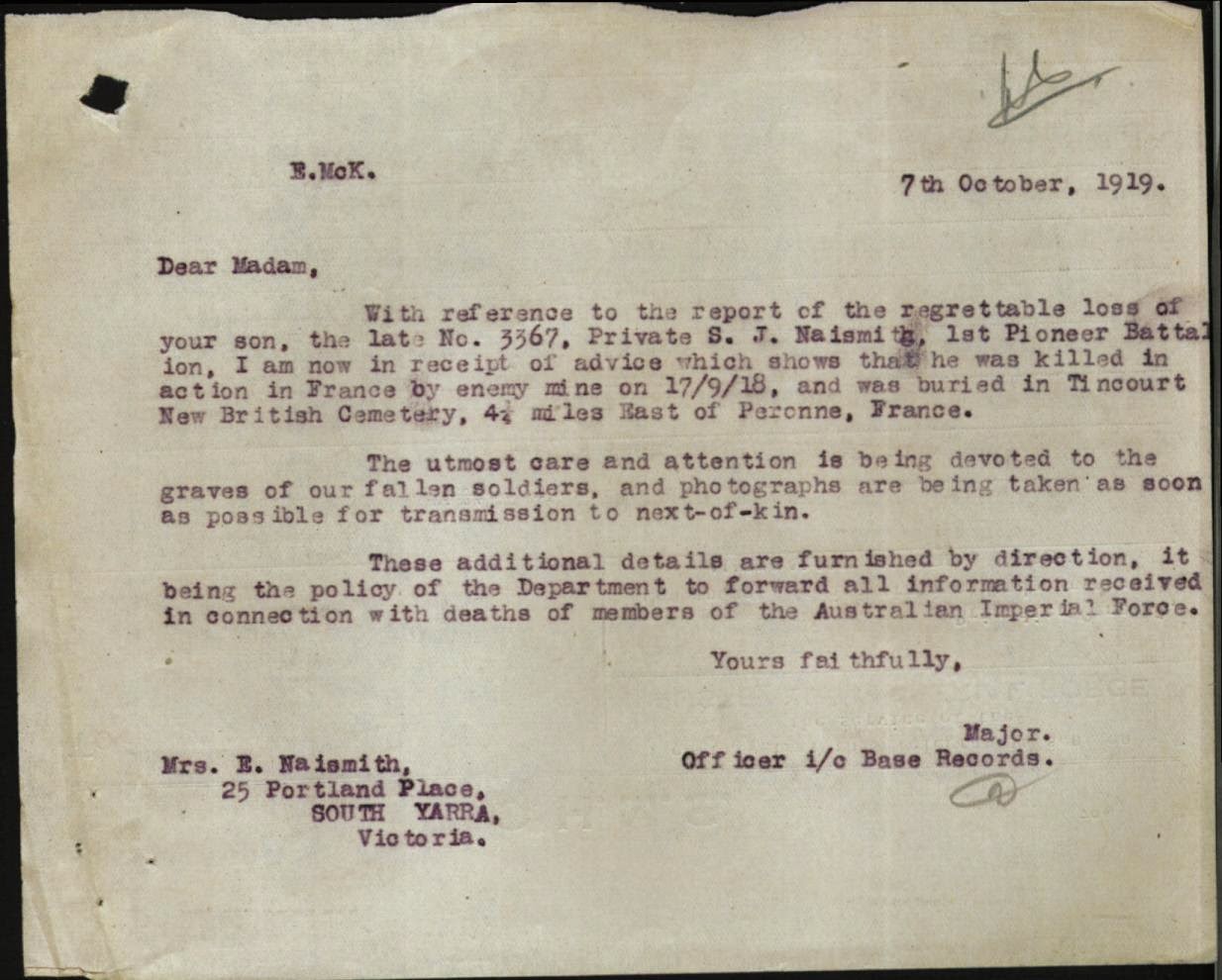 Roll of Honour name projection at the Australian War Memorial in Canberra.

Samuel James Naismith's name will be projected onto the exterior of the Hall of Memory at the AWM on:

The 1st AIF was a purely volunteer force for the duration of the war. In Australia, two plebiscites on conscription were defeated, thereby preserving the volunteer status but stretching the AIF's reserves towards the end of the war.

About 2,100 women served with the 1st AIF, mainly as nurses. Close to 20% of those who served in the 1st AIF had been born in the United Kingdom but all enlistments had to occur in Australia (there were a few exceptions). As a volunteer force, all units were demobilized at the end of the war.

*it should be noted however, that the term '1st AIF' was in use as early as August 1914, in anticipation that a 2nd AIF would one day be formed.


The following are a few links that were of great help with the blog posting of Samuel Naismith so that I could record his life in the AIF as close as possible.

some of the above - re the journey in October 1915 on board the HMAT NESTOR - are from the diary of Bert Manderson as written here.


With grateful thanks to all of the above websites.