Samuel lived in the Wimmera District for a few years and then in 1894 - at the age of 27 -  left Warracknabeal and moved to the district around Tumbarumba in New South Wales.  This is where he met the widow - Eliza Quinn - and they had a son they named Samuel James Naismith. Samuel (junior) was born at Tumbarumba on 23rd May 1895.

In 1903, Samuel was reported as "missing' by his brother - Hiram Thomas Naismith.  Hiram mentioned in the Police Gazette of NSW that Samuel had been missing for just on 9 years. There is no record of them locating each other, but one can only assume so. We do have the census records of 1914 Samuel & Eliza residing at 39 Cliff St, Prahran and at 25 Portland St, South Yarra where his occupation is a brick maker.

At the age of 50 in March of 1917, Samuel had enlisted in the AIF, was given the service number 3694 and allocated to the 2nd Pioneer Battalion. By the 11th May he had embarked Melbourne on board the HMAT SHROPSHIRE bound for Plymouth, England.

Pioneer Battalions were essentially light military combat engineers organised like the infantry and located at the very forward edge of the battle area.  They were used to develop and enhance protection and mobility for supported troops and to deny it to the enemy.  They constructed defensive positions, command posts and dugouts, prepared barbed wire defences and on occasion breached those of the enemy using devices like the Bangalore Torpedo.

Although they had existed in the Indian Army before 1914, pioneer battalions were used on a large scale by Commonwealth forces on the Western Front during the First World War. Because of its largely static nature, there was a much heavier reliance on field defences and the provision of mobility support to get people weapons ammunition rations and stores up to the front and casualties out.  Roads and railways needed to be built maintained and repaired.

While these were also Engineer tasks, Engineers alone could not meet the heavy demand, while riflemen were always needed at the front. Therefore, pioneer battalions were raised to meet the needs of both and trained to support both engineers and infantry.

The 2nd Pioneers were raised in 1916 and were engaged in every action undertaken by the 2nd Division, starting at Pozieres and Mouquet Farm in mid 1916 through Bullecourt and Third Ypres in 1917, the stemming of the German tide in the Spring Offensive of 1918, action in the north of France during June July 1916 around Merris  culminating in the final stages of the Hundred Days campaign in late 1918.

In January 1918 he proceeded overseas to France and was taken on strength by the 2nd Pioneer Battalion. Samuel was attached to the Australian Graves Detachment and began the work of locating, burying and reburying the Australian dead, particularly around Amiens.

In September of that same year (1918) his only son - also named Samuel James Naismith - was KIA at Tincourt, Somme, France. He was killed by an enemy mine early on the morning of 17th September 1918.

One year later - Samuel Naismith - returned to Australia on board the PORT DENISON arriving into Melbourne on 13th November 1919. 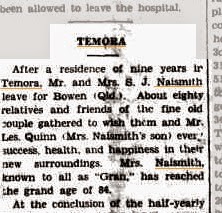 There is a report of Sam and his wife (Eliza) leaving Temora in July 1936 and then moving to Bowen in Queensland, they obviously did not stay there too long and returned to Cootamundra Road, Temora where he lived with his wife Eliza. He died there at the age of 74 years on 4th July 1941.

next blog post is on his son - Samuel James Naismith - who was KIA on 17th September 1918 in the Tincourt area of France.