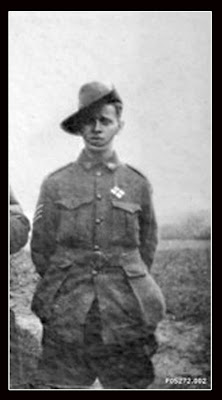 born in Richmond, Victoria, Australia in 1893 to

George and Isabella were married on 27 August 1878


and had seven children.


8th Reinforcements, 14th Battalion,
service # 2682 aboard the SS Makarini on 15 Sept 1915
*note:
The DALITZ Brothers of Horsham and Allan Wesley WALKEDEN from Tasmania also set sail on board the HMAT MAKARINI in September 1915

Just 4 weeks later Ray Bartram became dangerously ill with appendicitis and did not recover until after Christmas in December 1915.

In March 1916 he was given 14 days detention for "pilfering goods at the Abu-Sueur Railway Station".

By July 1916 the 46th Battalion occupied the Front Line at Sailly-le-Sec in France.  By August the Battalion was part of the Battle of Pozieres which was a two week struggle for the village of Pozieres and the ridge on which it stood.

The following month (September 1916) the 46th Battalion made an unsuccessful raid against Hollandscheshuur Farm Salient. The raid consisted 3 Officers and 46 'other ranks'.

Ray was admitted to hospital twice in October 1916 with "septic hands" and rejoined his unit on 27th. This would have been a terrible time for all the men as it was written in the
"Australians on the Western Front 1914 - 1918" re the winter of 1916:

The autumn rains had set in by the time the Australians reached the Somme and the whole battlefield had become a sea of mud. Broken ground, easily traversed in dry weather, was a bog. Trenches and tracks were often impassable. It could take relays of stretcher-bearers many hours to bring in a wounded man, the mud slowing the journey to a kilometre an hour.

Early in December the 46th Battalion was at the "New Carlton Camp" situated near Bazentin, Somme, France, 10 klms behind the front line engaged in road making and from there marched on to Dernancourt where they stayed until early January.

and the following was written in the

On 18 November 1916, the Battle of the Somme officially ended and for the remainder of the winter of 1916–17 the Australians garrisoned the line east of Flers. From there they kept pressure on the Germans by means of small attacks and raids. However, the main battle was against mud, rain and frost-bite.

The front lines were up to twelve kilometres away from good roads so major efforts were made to repair approach roads to allow supplies to be brought forward. As the roads neared the front they became ‘duckboard’ tracks’, the only surface by which it was possible to get across the sea of mud. Supplies of hot food, leather waistcoats, thigh boots, worsted gloves, dry socks gradually reached the front where they made the awful conditions if not better at least bearable. In the rear, however, both the accommodation and comfort for troops in reserve were dramatically improved.

12 days later he was killed in action


south of Ypres near Wyschaete in Belgium


along with five of his comrades by a 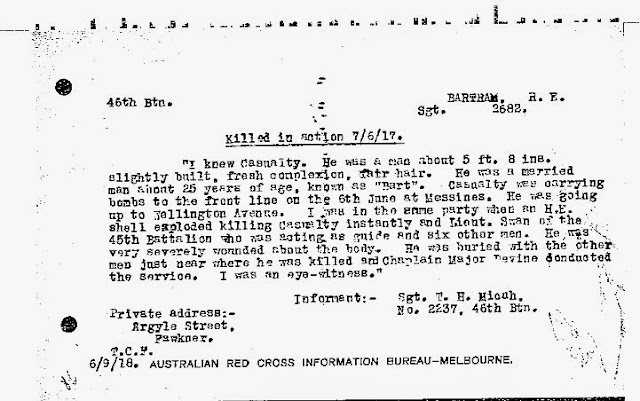 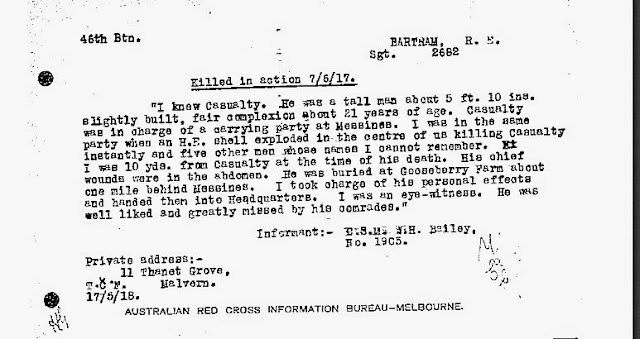 The article on the Battle of Messines
can be located HERE and in part reads:

It has been argued that the Battle of Messines was the most successful local operation of the war, certainly of the Western Front.  Carried out by General Herbert Plumer's Second Army, it was launched on 7 June 1917 with the detonation of 19 underground mines underneath the German mines.

The target of the offensive was the Messines Ridge, a natural stronghold southeast of Ypres, and a small German salient since late 1914.  The attack was also a precursor to the much larger Third Battle of Ypres, known as Passchendaele, decided upon by the British Commander-in-Chief Sir Douglas Haig following the collapse of the French Nivelle Offensive earlier in May 1917.

General Plumer had begun plans to take the Messines Ridge a year early in early-1916.  Meticulous in manner, Plumer preferred to plan for limited successes rather than gamble all on a significant breakthrough. 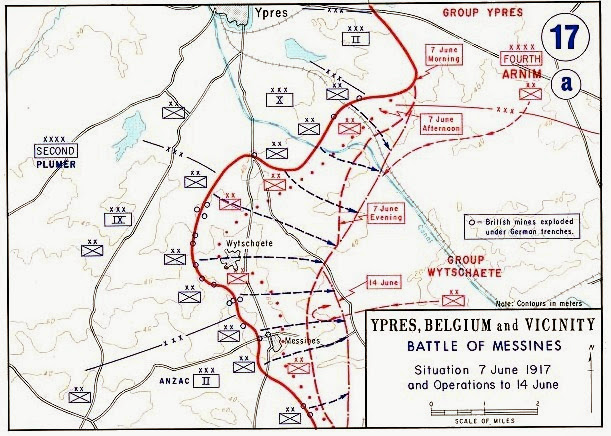 The following website has quite a bit on the battle of Messines including some images and is titled:


an unofficial history of the


The attack effectively began on 3rd June when the preliminary bombardment intensified, and was kept up until 0250 hrs on 7th June when Raymond Everard BARTRAM was killed. 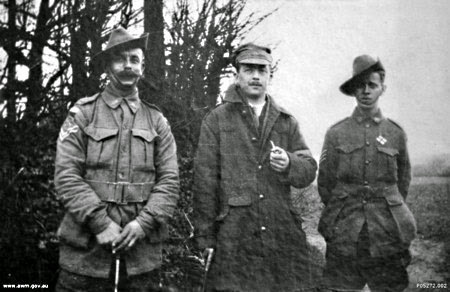 all three brothers were killed in 1917

Blog post on Arnold Roy Bartram has been updated on
3rd May 2012 and can now be found here.

and the cousin of "The Bartram Brothers" Leslie Norman Krause  also has a blog post here.


as always, these blog posts are only possible with the generous help and support from the Australian War Memorial, The Australian Defence Force, The National Archives and various family members.


Raymond Everard Bartram's name will be projected onto the exterior of the Hall of Memory at the AWM in Canberra on: