was born in Richmond,  Victoria, Australia


in 1895 to
George Andrew BARTRAM and Isabella SHANDS
. 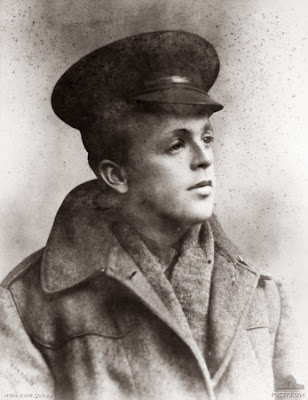 George and Isabella were married on 27 August 1878 in Richmond, Victoria, Australia and had seven children.

He was a 21 year old Shipping Clerk and living with his parents at 9 Hull St, Richmond when he enlisted in the AIF on 6 June 1916. Private Bartram at that time was assigned to the 58th Battalion.

Both Arnold and his brother Cyril, were in the 58th Battalion, 4th Reinforcement. 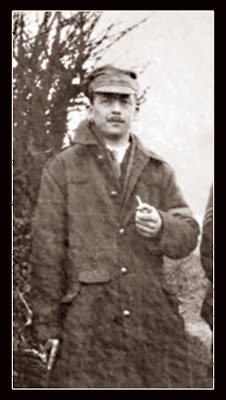 He embarked from Melbourne for Plymouth per the H.M.A.T. "Orsova," on the 1st of August 1916 with the 4th reinforcements and then proceeded to France per the "Princess Henrietta," on the 6th of December 1916.


O5 January 1917 Arnold was "taken on strength" to the 60th Battalion in the field at Fribourt, France.

According to the unit diary - on the 14th January they left Ribmount at 8:30am and marched through Buire to Fricourt Camp where they could shower and enjoy a hot meal ... after all, it was not the best of days to be out 'walking'. The day was quite cold and snow had been falling for at least three hours.

By the 24th January the 60th Bn was at Needle Trench (near Lesboeufs) in France. The morning seemed to be 'quiet' but by the afternoon Needle Trench was being heavily shelled. The 60th Battalion asked for retaliation which was successful in stopping the enemy's shelling.

The 60th Battalion were around Longueval for the first couple of weeks of February, when they then moved on to the Flers area. Longueval is near where the Battle of Delville Wood took place in late 1916.

Enemy artillery was active throughout the cold and frosty night of 4th March, where they were still in the Flers area.  Arnold was admitted to hospital for gastroenteritis on the 13th of March, but back with his Battalion the following week. By the 18th the 60th Bn had evacuated and moved onto Fremicourt where they stayed until 25th March.

During the month of April, the Battalion moved from Beaulencourt, St Aubin, then back to Beaulencourt and onto Mametz where they arrived at 5:00pm on 20th April.  The complete Battalion was engaged in camp cleaning & cleansing of persons and stayed at Mametz for the duration of April.

With the month of May came the first touch of Spring. The unit diary even makes note of the weather:

On the 10th May the 60th Battalion were at Noreuil and at 10:00am the diary notes that the men were improving their dugouts & clearing up the area they were occupying.

By 9:00pm D Company - who were located in a sunken road on the opposite  side of the village were subjected to some heavy shelling. One killed and four wounded... and the following day the forward area was still under constant shell fire. 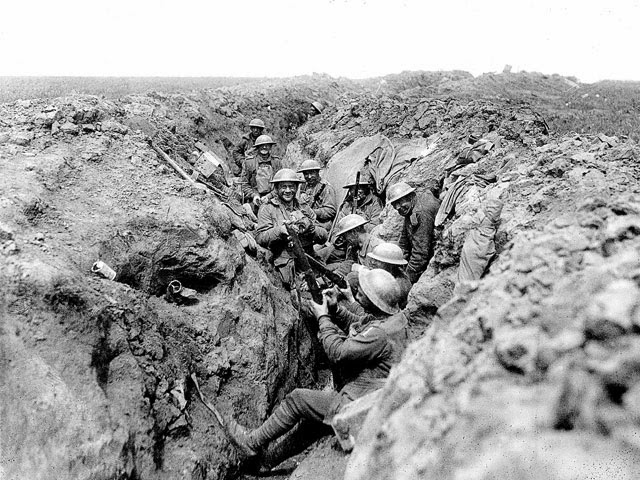 At 12:30am on the morning of 12th May 1917, B & C Company (Arnold was in C Company)  marched forward and took over front and support line trenches from 58th Battalion. At 2.30am the enemy was shelling the support line heavily. According to the diary, the stretcher bearers "did a splendid job" in carrying out the wounded. Total: 13 Killed in Action and 71 Wounded. 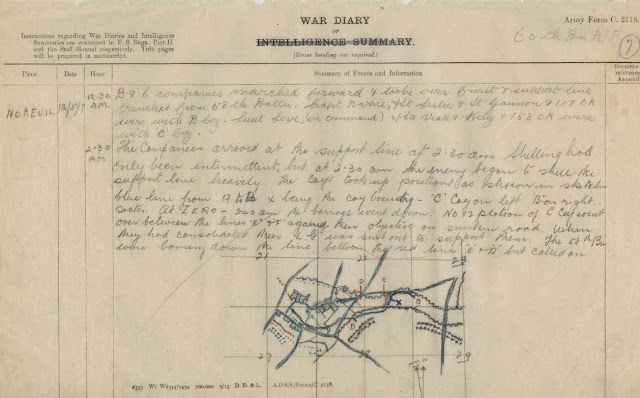 This is when Arnold received a gun shot wound to the abdomen - in the Second Battle of Bullecourt - on the 12th of May 1917. 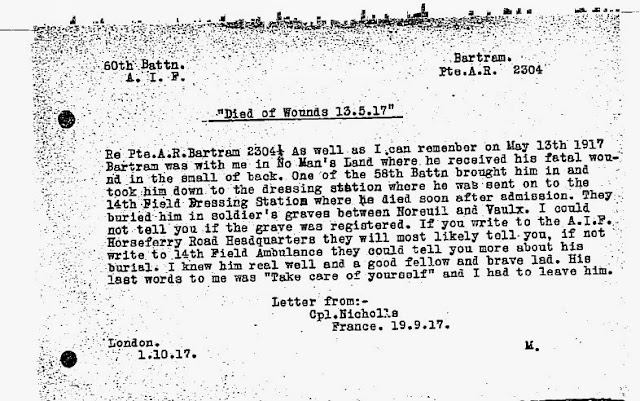 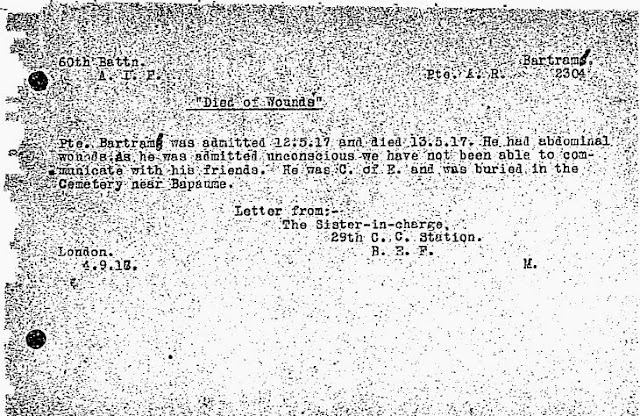 He was first buried in the soldiers grave between Noreuil & Vaulx. Later buried at Greveillers British Cemetery (actual date NK) 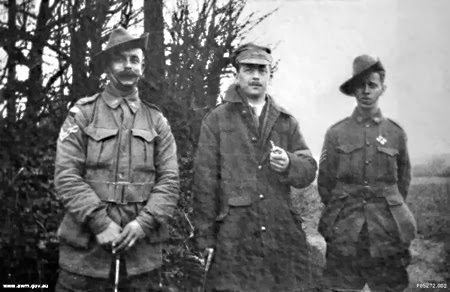 The Bartram Brothers at war

Informal outdoors portrait of three Bartram brothers who have met up whilst on active service, from Richmond, Vic.


Identified left to right: 6955 Private (Pte) Reginald Percy Bartram, 37th Battalion; 2304 Pte Arnold Roy Bartram, 60th Battalion; and probably 2682 Sergeant (Sgt) Raymond Everard Bartram, 46th Battalion. Pte Reginald Bartram was killed in action in Belgium on 4 October 1917 aged 36 years. Pte Arnold Bartram died of gun shot wounds in France on 13 May 1917 aged 21 years. Sgt Raymond Bartram enlisted as a private on 3 July 1915 and embarked from Melbourne with 8th Reinforcements, 14th Battalion, aboard SS Makarini on 15 September 1915. From October 1915 until 26 December 1915 he was dangerously ill with an appendicitis. In March 1916 he transferred to the 46th Battalion and on 8 December 1916 he was promoted to corporal. On 26 May 1917 he was promoted to sergeant. He was killed in action in Belgium on 7 June 1917 aged 23 years. Another brother 2126 Private (Pte) Cyril George Bartram, 58th Battalion, returned to Australia on 27 July 1917 due to constant illness.

Blog post on Raymond Everard Bartram has been updated  and can be found here.

and the cousin of "The Bartram Brothers" Leslie Norman Krause  also has a blog post here.


Arnold Roy Bartram's name will be projected onto the exterior of the Hall of Memory at the AWM in Canberra on:

These dates and times are estimates.
The actual time of projection could change as a result of weather and other factors, so it is advisable to check closer to the date.
In the rare event of a temporary loss of electrical power, the names scheduled for display in that period will not appear until the next time listed.