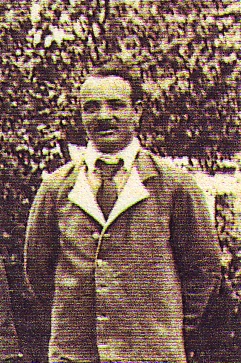 Henry William Barwise was born in 1882 at Great Western, a small regional village west of Ballarat in Victoria, Australia.  His parents were Henry Machel Barwise and Harriet Isabella Walkeden.

In 1910 he married Florence Lily Pearce and they had four sons before he enlisted in the AIF. On his return they had a further three children, two daughters and one son.

Henry enlisted at Melbourne on 19 January 1917. He was a driver and given service # 34207 with the 1st D.A.C in the 26th Reinforcements.  A part of the Field Artillery Brigade, March 1917 Reinforcements.

From the In March 1916 Division Artilleries were greatly expanded for service on the Western Front, with three brigades each of four batteries and one of three batteries, and medium and heavy trench mortars were added.

This was changed again in January 1917, with the number of brigades reduced to just two. In February 1918, medium trench mortar batteries were reorganised and the heavy batteries reduced to just one, under Corps control.
On the Western Front the normal practice was for divisions in the line to have support from two or more division artilleries. 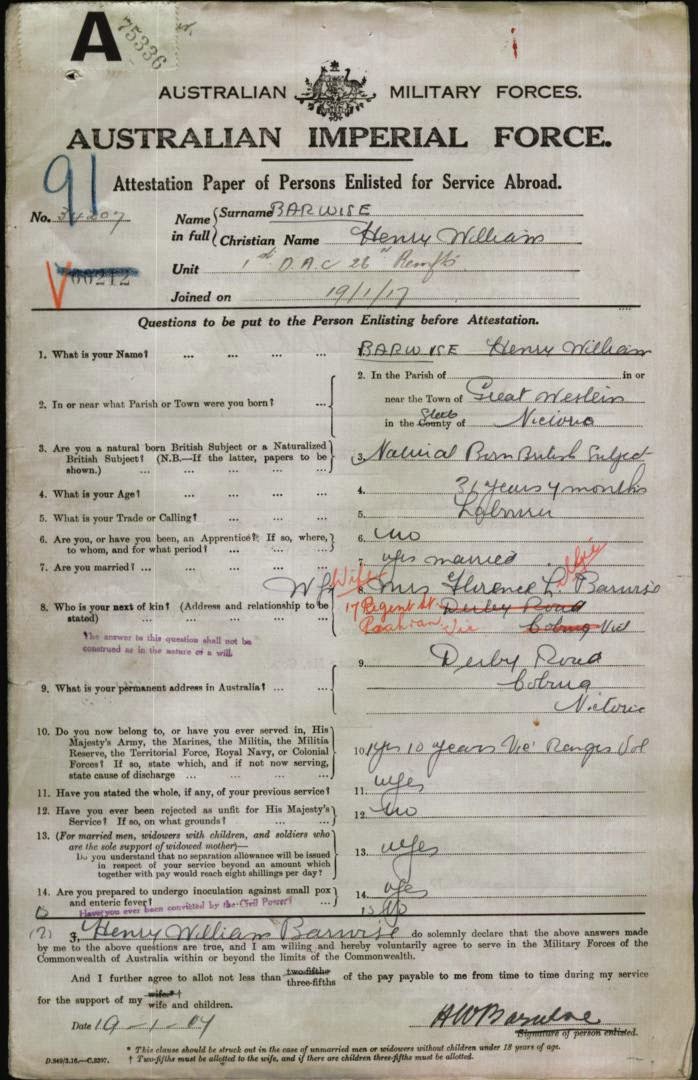 on 12th May 1917, Henry William Barwise embarked Melbourne on board the HMAT Ascanius (A11) and disembarked in Devonport in England late July 1917. 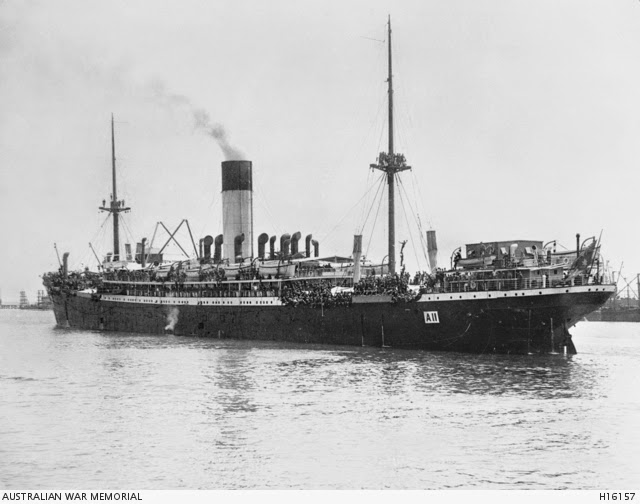 above: The troop transport Ascanius (A11)

November 1914. Fremantle, Western Australia. November 1914. The troop transport Ascanius (A11) which was the first ship carrying troops to leave the area. It joined the ANZAC convoy on 3 November 1914 and proceeded in convoy to Colombo.

After leaving Colombo the Ascanius rammed the troop transport Shropshire (A9) on 21 November 1914 but both ships were able to continue in convoy to Aden. (Donor A.W. Bazley to the AWM) 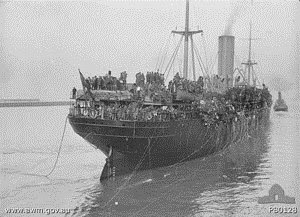 above image: HMAT Ascanius (A11)

27 May 1916. Troops crowded on the decks of the stern of the troopship HMAT Ascanius (A11), being towed out to sea by a tug from Port Melbourne.

Note the soldiers on the decks waving flags and the streamers hanging off the decks of the ship.

above image: HMAT Ascanius in Melbourne


In September of 1917, he was caught AWOL - from 6.00am till 11.45pm on 8th September and forfeited a total of 9 days pay. In November he proceeded to France via Southampton.

He suffered much illness whilst in France and was admitted to hospital on a number of occasions suffering from Neuritis, Neurasthenia, Rheumatism & influenza.

By July of 1918 he was in the 4th General Hospital in Plymouth with Neuritis which is an inflammation of one or more nerves. The characteristic symptoms of neuritis include pain and tenderness; impaired sensation, strength, and reflexes.

In September he returned to Australia due to "a medical condition" and on his records it has: Neurasthenia.

He died in the farm shed at Marshall on 8th February 1948 from heart failure and is buried at the Geelong Western Public Cemetery. 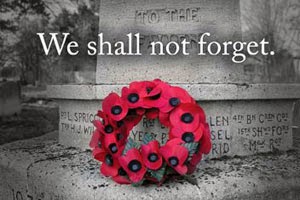 we shall not forget any family member, regardless of them Returning to Australia or sadly being Killed in Action.


once again, I would like to extend my grateful thanks to the AWM, CWGC and the NAA for allowing us access to their amazing collections!