Arthur Joseph Weir was born on 6 February 1889 at Winiam, a small village in the western district of Victoria, Australia.

Louisa was born in 1866 at Nelson between Portland & Port MacDonnell on the Victorian coast. She married Arthur's father - Robert Weir - at Winiam in 1887.

Louisa and Robert had eight children, two of their children - Frederick & Arthur - were listed as being killed in action during WW1.

Arthur enlisted in Melbourne on 15th July 1915 at the age of 26 years and was granted the service number of 358. Arthur acknowledged his father - Robert Weir - as his next of kin. 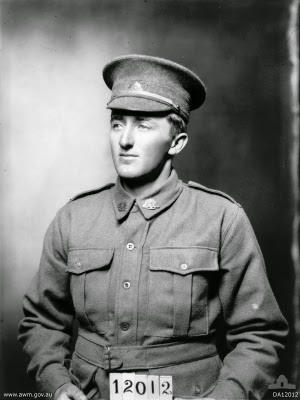 Another family member - Edward Harold Artso - also enlisted in the 29th Battalion and was KIA ~ 18th May 1918. 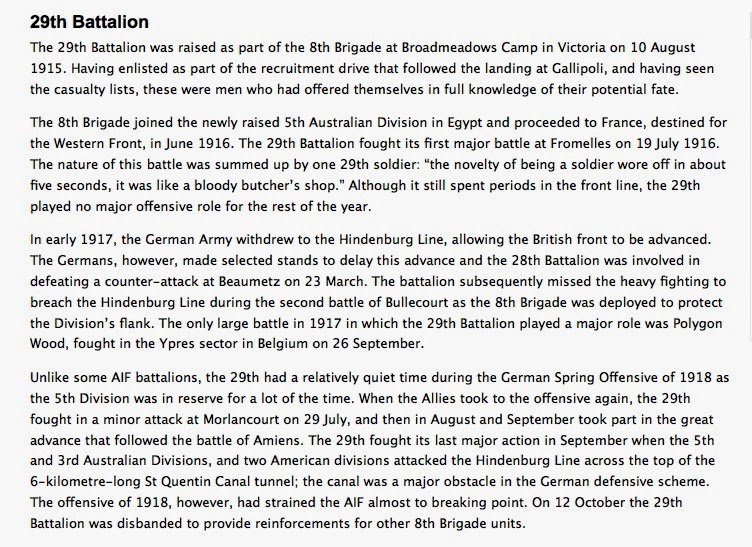 on 5th November 1915, The Battalion proceeded by three special trains to Melbourne where a route march through the principle streets took place. His Excellency the Governor of Victoria & Minister of Defence inspected the troops taking salute on the steps of Parliament House prior to their departure to the Middle East. 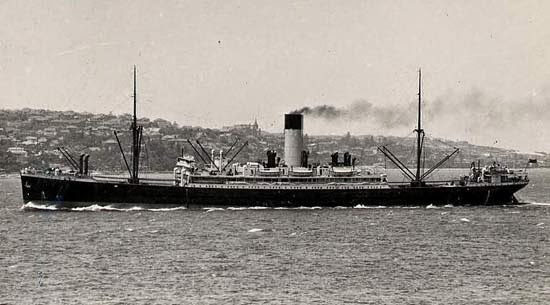 The HMAT Ascanius departed Melbourne on 19th November 1915 bound for the Australian training camps in Egypt, where the AIF would undergo a doubling in size and reorganization after its withdrawal from the Gallipoli campaign.

Training was continued on board ship, but with only 200 rifles being available for this purpose! While "at sea", along with other soldiers, Arthur was charged with the crime of 'gambling' and was cautioned!

By 7 December 1915, the Ascanius had arrived at Port Suez in Egypt where the troops disembarked. One week later the Battalion had received orders to move and proceeded to Ismailia by train.

While Arthur was in the Middle East, his brother - Frederick William Weir - enlisted on 17th March 1916 in the AIF at Horsham. He was in the 38th Battalion and departed from Melbourne on 20th June 1916 on board the HMAT Runic.

Arthur was bound for France on 14th June 1916 on board the troopship HMT Tunisian. One week later he had arrived at Marseilles with the rest of the 29th Battalion and was then transported by rail to Hazebrouk.

10 July 1916 the 29th Battalion were in Bois-Granier, northern France. This area was known as "The Nursery" because it was a relatively quiet sector and was used to introduce new troops to trench warfare.

The Battle of Fromelles (19–20 July 1916) was a British military operation on the Western Front during World War I, subsidiary to the Battle of the Somme. General Headquarters ("GHQ") of the British Expeditionary Force ("BEF") had ordered the First Army and Second Army to prepare attacks to support the Fourth Army on the Somme 80 kilometres (50 mi) to the south, to exploit any weakening of the German defences opposite.

The attack took place 16 kilometres (9.9 mi) from Lille, between the Fauquissart–Trivelet road and Cordonnerie Farm, an area overlooked from Aubers Ridge to the south. The 29th Battalion took part in an attack against the Germans around Delangre Farm. The ground was low-lying and much of the defensive fortifications on both sides consisted of breastworks, rather than trenches.

The 8th Brigade was positioned on the northern end of the Australian attack line at The Battle of Fromelles. Arthur Weir was amongst the 5,533 Australian casualties from the disastrous attack on the heavily defended ‘Sugar Loaf’ Salient at Fromelles. At first Arthur was listed as MIA, but was soon reported as KIA.

Much has been written about the massive losses as well as the battle itself. Some of it can be seen here on Wikipedia.

The Australian War Memorial states: The 8th Brigade joined the newly raised 5th Australian Division in Egypt and proceeded to France, destined for the Western Front, in June 1916. The 29th Battalion fought its first major battle at Fromelles on 19 July 1916.

The nature of this battle was summed up by one 29th soldier: “the novelty of being a soldier wore off in about five seconds … it was like a bloody butcher’s shop.”

The battle at Fromelles was the only battle the AIF fought in the Western Front that failed to produce a positive response. Much of the blame was placed on poor planning and execution of the British High command, supposedly "professional" soldiers.

“We found the old No-Man’s-Land simply full of our dead,” he recorded. “The skulls and bones and torn uniforms were lying about everywhere.” 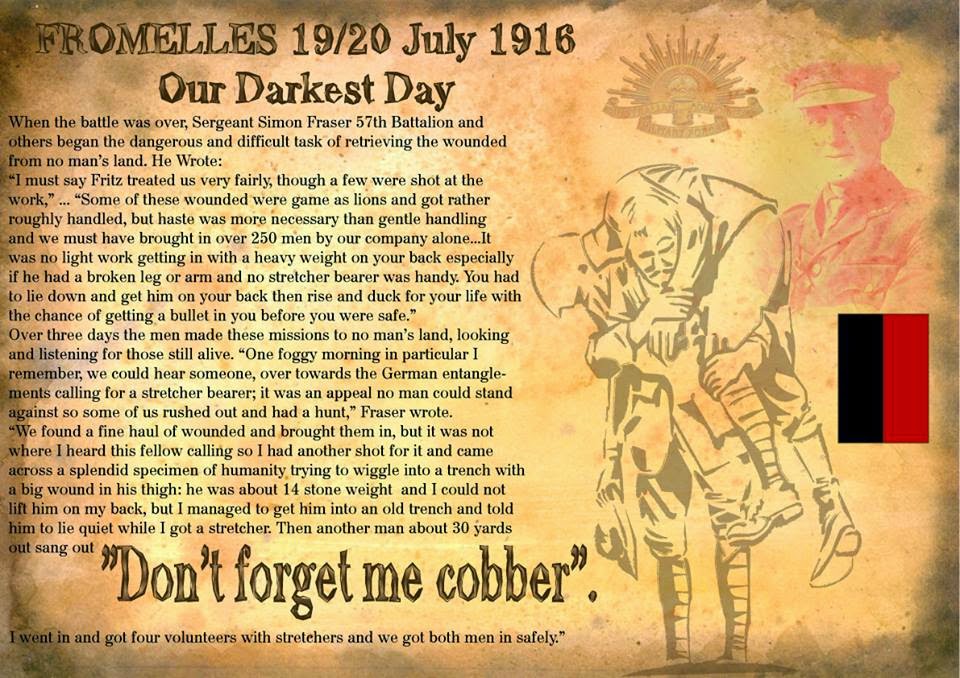 With their ID discs removed, the remains were unidentifiable. They were buried in an unmarked, common grave in what is now VC Corner cemetery.  The names of all those lost are engraved on a series of tablets across the back of the cemetery.

Large numbers of soldiers were not accounted for.  On the left flank, the 8th Brigade penetrated the German lines looking for a supposed second line of trenches.  Instead all they found was a muddy ditch and having over-extended, and with their right flank exposed by the failure of the neighbouring Brigades to neutralise the enemy machine guns, they were enfiladed, progressively cut off and destroyed piecemeal in counterattacks and clearance actions by the German defenders throughout the night and early morning of the 20th July.  Many had been killed or captured  behind enemy lines, mainly from the 8th Brigade.  The dead - including Arthur Weir - were were buried by the Germans.The body of Arthur was later recovered and it was not until the research of amateur historian Lambis Englezos that the clue to his possible burial place was revealed. Nineteen members of the 29th Battalion were listed amongst the 175 missing diggers from the Battle of Fromelles.

Included in the Red Cross files were copies of the German death vouchers completed by the German army when they cleared their trenches, after the battle, and the subsequent appearance of the names on German death lists. (see below)

The Australian soldiers had been taken to the field adjacent to Pheasant Wood where they were placed in pits and lay undetected for nearly 92 years.


In 2007, The Australian Army commissioned Glasgow University Archaeological Research Department (GUARD) to undertake non-invasive surveys to assess the likelihood of burials having taken place at Pheasant Wood, and whether the ground had been disturbed by subsequent recovery.  The excavations have confirmed the presence of a significant number of human remains, consistent with the German accounts of the burials of Australian and British soldiers in the pits at Pheasant Wood.

..... on 13 March 1917 the identification disc (of Arthur Weir) was received from Germany. No particulars afforded except that the soldier is deceased.

To be reported as KILLED IN ACTION ~ FRANCE

The list of 75 Australian soldiers whose remains were recovered from the burial pits at Pheasant Wood and whose identities have been established by the Fromelles Joint Identification Board was released on Wednesday 17 March 2010. One of those being Arthur Joseph Weir: 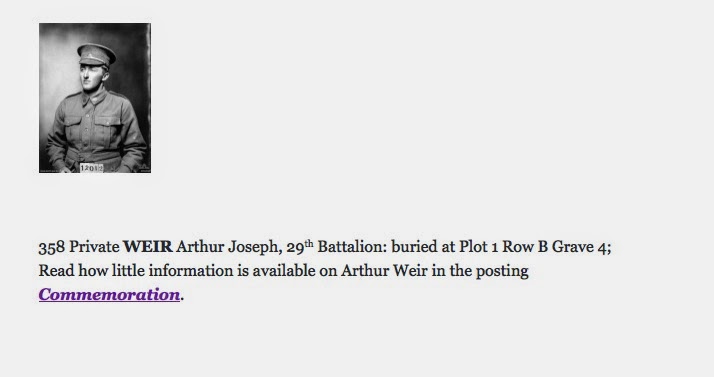 In the Nhill Newspaper on 3rd April 1917 the following notice appeared.  His parents had been officially informed of his death nine months later. 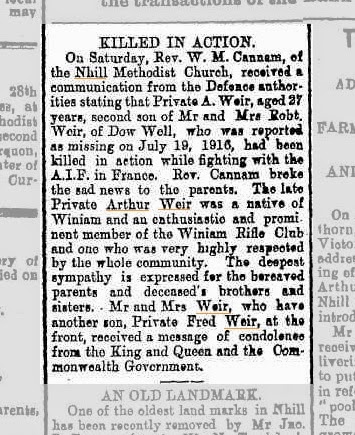 The Weir family placed this 'in memoriam' notice in the Nhill Newspaper dated 20th July 1917..... 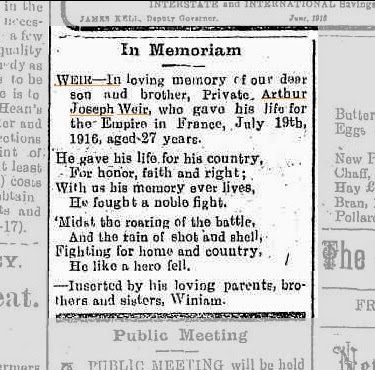 The family suffered further loss with Frederick William Weir (brother to Arthur) being killed in action on 13th October 1917 in Belgium. 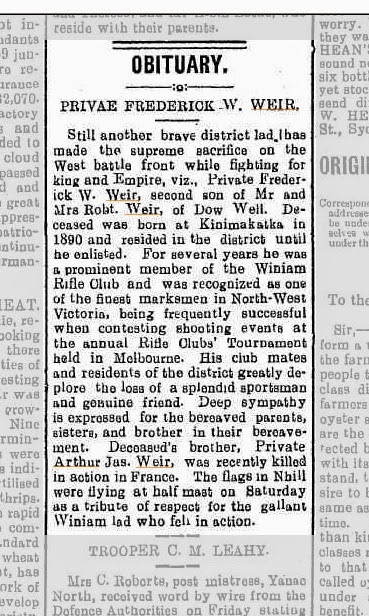 The remains of Arthur were identified in March 2010 and the results were released for public notice on 5th August 2010. 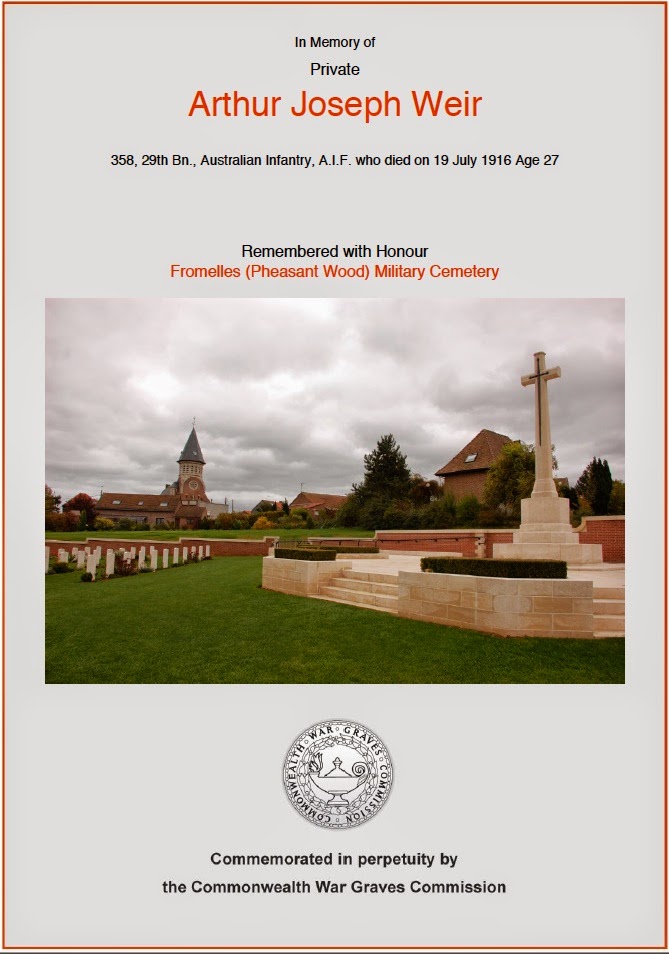 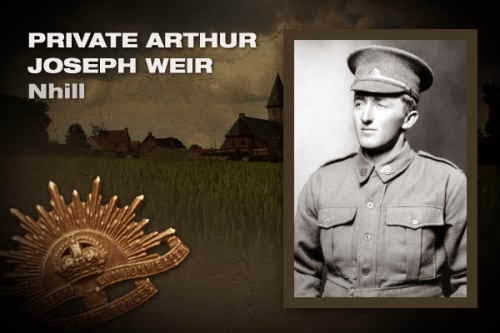 Arthur Joseph Weir's name will be projected onto the exterior of the Hall of Memory on:

further may come to light as I continue to 'dig'!

Other websites of interest:


In particular would like to extend my grateful thanks to the AWM, CWGC and the NAA for allowing us access to their amazing collections!

I use all the above sites to gather further information for my Military History blog posts.

The following Facebook pages maybe of help to others: